Bank to pay €2.1bn dividend to the exchequer after its profits grew in 2017 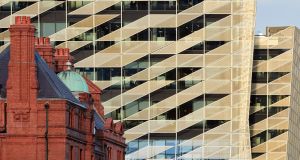 Central Bank governor Philip Lane said the bank’s headline profits will decline over the medium term, as the impact of the special portfolio of IBRC-related bonds fade.

A senior central banker said on Wednesday there is “absolutely no evidence” that overseas buyers of Irish loan portfolios are acting more aggressively in foreclosing on soured mortgages than mainstream banks.

The comments come as Irish lenders prepare to sell an unprecedented amount of mortgages this year as they seek to cut their level of non-performing loans (NPLs), and as one UK bank aims to finally exit the Irish market a decade after the property crash.

“There is absolutely no evidence that non banks are being more aggressive in terms of seeking a legal solution than banks,” said Ed Sibley, a deputy governor at the Central Bank, as the institution unveiled its 2017 annual report. “Loss of ownership has been much lower overall than the level of restructures [of bad loans] that are in the system.”

Permanent TSB has €3.7 billion of non-performing mortgages on the market, while AIB has included soured buy-to-let loans in a portfolio of up to €2 billion of NPLs it has up for sale – as European regulators pile pressure on both banks to lower their levels of impaired assets.

Elsewhere, Lloyds Banking Group has put its remaining €5 billion Irish mortgage book, mainly comprised of performing loans, up for sale as it aims to end its retreat from the Republic, which began in 2010. Ulster Bank, a unit of Royal Bank of Scotland, has signalled it plans to sell some distressed loans in the next six months. The disposal could involve 7,000 mortgages, The Irish Times reported in February.

The scale of sales prompted Fianna Fáil to present a Private Members’ Bill to the Dáil in February, seeking to have buyers of Irish loan books regulated by the Central Bank. Currently, service providers managing loans for so-called vulture funds must be regulated in Ireland.

Mr Sibley insisted that borrowers indebted to mainstream banks or funds have the same protections and that it is “never too late” for those in deep distress to engage with their lender to find a restructuring solution. Central Bank governor Philip Lane said that repossession “has to be part of the wider framework” if no viable resolution can be found.

Meanwhile, Prof Lane said that mortgage limits, introduced in Ireland in February 2015 to prevent another bubble forming and subsequently modified twice, “are close to the point to where these rules are pretty stable”.

The Central Bank said in its annual report that it will pay a €2.1 billion dividend to the exchequer after its profits grew last year as it continued to sell bonds linked to a restructuring of the now-defunct Anglo Irish Bank and Irish Nationwide Building Society.

Profit rose by 15 per cent to €2.63 billion, as gains from the sale of securities held in its “special portfolio” increased by €594.4 million.

The Central Bank received €25 billion of government bonds in 2013 under a restructuring of so-called promissory notes had been used by the State during the financial crisis to rescue the two lenders, which were subsequently renamed Irish Bank Resolution Corporation (IBRC). IBRC was put into liquidation in February 2013.

The Central Bank sold €4 billion of such bonds to the National Treasury Management Agency (NTMA), which cancelled them. All told, it has sold €11 billion of the bonds, well ahead of a schedule agreed five years ago.

Central Bank governor Philip Lane said on Wednesday that the bank’s headline profits will decline over the medium term, as the impact of the special portfolio of IBRC-related bonds fade.

Prof Lane also noted that the ongoing economic recovery is expected to continue at Irish, European and global levels in the near term - supported across the euro system by the accommodative monetary strategy of the European Central Bank – but that prudential management of macro-financial tail risks is also necessary.

However, he warned that highly open economies such as the Republic are more volatile than larger economies, which means the domestic economy can grow strongly for extended periods but is especially vulnerable to negative shocks.

“High stocks of both public and private debt and the inherent volatility of the Irish macro-financial system requires ongoing vigilance,” he said, highlighting Brexit as a major challenge facing the economy and financial firms.