French private-sector activity surged to six-year high in May 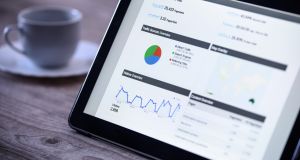 The strength of the German and French composite PMIs compared with a static euro zone reading suggesting growth has slowed in other countries across the region. Photograph: iStockPhoto

Businesses across the euro zone maintained April’s blistering growth rate this month as firms struggled to meet growing demand, suggesting the bloc’s economic momentum is sustainable at least for now, a survey showed.

Data pointing to a broad-based expansion alongside rising price pressures and a record level for Ifo’s German business morale index will be welcomed by policymakers at the European Central Bank.

IHS Markit’s euro-zone flash composite purchasing managers’ index (PMI) for May, seen as a good guide to growth, matched the previous month’s 56.8, its highest since April 2011. A reading above 50 indicates growth.

IHS Markit said the PMI pointed to second-quarter GDP growth of 0.7 per cent, much faster than the 0.4 per cent predicted in a Reuters poll last week. Official flash data said the bloc’s economy grew 0.5 per cent in the first quarter.

“The strength of both the euro-zone composite PMI and the German Ifo in May provide further evidence that the economic recovery gained pace in Q2,” said Jessica Hinds at Capital Economics.

Activity in the French private sector surged to a six-year high in May as growth in the dominant service sector accelerated and the election of President Emmanuel Macron lifted business optimism, a sister survey showed.

Growth was 0.6 per cent quarter on quarter, up from 0.4 per cent in the final three months of last year.

“Today’s strong German data add to the evidence that not only the German economy but the entire euro-zone economy could become the positive growth surprise of 2017,” said Carsten Brzeski at ING.

However, the relative strength of the German and French composite PMIs compared with the static euro-zone reading suggests growth has slowed in other countries across the region.

“As much as the pessimism at the start of the year was exaggerated, the current euphoria is as well. Be aware of the sugar rush,” Brzeski said.

The euro set a new six-month month high on Tuesday and the region’s shares made gains as the latest economic data made for some encouraging reading, especially in Germany.

Buoyant demand meant firms across the bloc built up backlogs of work at the second-fastest rate in over six years.

Factories across the currency union had a much better May than predicted. A Reuters poll said the manufacturing PMI would fall to 56.5 but it instead climbed to 57.0 from 56.7, its highest since April 2011.

An index measuring output, which feeds into the composite PMI, rose to 58.4 from 57.9, also the highest since April 2011.

Demonstrating their confidence about the months ahead, factories increased headcount at the fastest rate in the 20-year history of the survey. The employment index was 56.2, up from April’s 55.5 and overall employment gains were the second best in a decade.

“It’s by no means suggesting you are going to see any serious slowdown from here,” said Chris Williamson, chief business economist at IHS Markit.

Growth in the bloc’s dominant service industry decelerated slightly this month, its PMI showed, dipping to 56.2 from 56.4 and missing forecasts in a Reuters poll for no change.

But last month’s final reading was the highest since April 2011. Chances are strong growth will continue – the business expectations index bounced to 68.1 from 67.2, its highest since early 2011. – (Reuters)