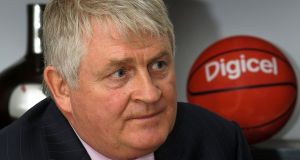 Denis O’Brien described Brexit as “Dunkirk without the ships” for the UK.

Dublin is in the midst of an office-market bubble and there “won’t be enough” people to put in them, businessman Denis O’Brien has said.

“Every time I come back to Dublin I’m staggered that there’s a new crane. I actually think we’re overbuilding offices and there won’t be enough people to put in them, ” Mr O’Brien told reporters on the fringes of the World Economic Forum in Davos.

The Irish telecoms entrepreneur, who is estimated by Forbes to be worth $5.5 billion, said he believed Dublin would lure fewer financial jobs from London than originally hoped for after the Britain’s decision to leave the European Union. He described Brexit as “Dunkirk without the ships” for the UK.

He also said the advent of artificial intelligence means there will be less need for office space in the future.

Mr O’Brien declined to comment when asked about an investigation by the Office of the Director of Corporate Enforcement (ODCE) into matters at Independent News & Media (INM), in which he owns a 29 per cent stake. The ODCE is looking into a whistleblowing complaint made by former INM chief executive, Robert Pitt, against outgoing chairman Leslie Buckley, arising from an aborted bid for radio station Newstalk.

The ODCE has also demanded to know from Mr Buckley who paid the bill for outside cybersecurity consultants, which were facilitated to gain access to the newspaper’s internal IT systems. Mr Buckley, a nominee of Mr O’Brien to the media company’s board, signalled last week that he was stepping down.

Mr O’Brien said that the chairman had been “trying to retire for the last three years” and that now his “work is done” and that he and the rest of the board “saved the business from going into receivership”.

On cryptocurrencies, Mr O’Brien said that there is “absolutely no chance” that he would invest in bitcoin, which saw its value soar last year before tumbling in recent weeks.

Axel Weber, chairman of Swiss banking giant UBS, also warned at the Davos gathering that bitcoin and other cryptocurrencies were speculative, risky and attracting investors who “don’t fully understand these products”.

“You meet guys from Wall Street and they’re all rocked up,” the businessman said. “It reminds me of 2000 [before the dotcom bubble burst].”