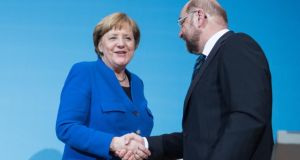 Ireland’s bilateral relationship with Germany could be facing turbulence after Berlin on Friday stepped up its battle against tax avoidance in the European Union, name-checking several Irish-based US tech companies.

Friday’s preliminary coalition accord, agreed after a 24-hour talks marathon, vows to tackle “tax dumping, fraud and avoidance” in the EU. A top priority: “fair taxation of large concerns, in particular the internet companies Google, Apple, Facebook and Amazon”.

“Tax dumping must be stopped,” says the paper agreed by Angela Merkel’s Christian Democrat union (CDU/CSU) with the Social Democratic Party (SPD). On page four of the 28-page agreement, the parties add: “Companies may no longer shirk their societal responsibility by playing EU states off against each other.”

Tackling tax dumping to raise revenues is a key measure in a preliminary coalition agreement focused on boosting social cohesion and confidence in democratic structures – both in Germany and across the EU.

Perceived EU tax-dodging by US concerns in Ireland is a particular priority for the centre-left Social Democratic Party (SPD), which has long viewed the State as a tax haven that deprives other EU member states of much-needed fiscal revenue.

Last November, the party voted against a request from Dublin to restructure its crisis-era loans, saving the Irish exchequer an estimated €150 million, until Ireland adopted a “fairer tax policy” towards its neighbours.

As the Government conducts a strategic review of Irish-German bilateral relations, the prominence in that review of tax avoidance claims may hinge on which party takes Berlin’s influential finance ministry.

The CDU, traditionally less preoccupied by Irish fiscal matters, has controlled the ministry for the last eight years. But speculation is growing the SPD, after controlling finance in the first grand coalition until 2009, is anxious to have it back as a political trophy – and to ensure, particularly on fiscal matters, that deeds follow words.

In addition, the would-be coalition partners restate their commitment to the long-running European debate on a common, consolidated base for corporate tax.

“The principle has to apply that the land where profit is earned is also the land where tax is levied,” the document says, promising close co-operation with France “to find a European answer to international changes and challenges . . . not least in the US”.