Inflation targets, digital money and climate change to be part of debate on bank’s future 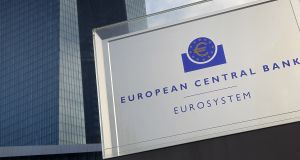 The review will last for most of the year and span topics from the inflation target to digital money and the fight against climate change. Photograph: AFP 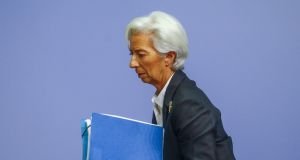 Christine Lagarde confirmed the ECB will review its strategy for the first time since 2003 after years of radical monetary stimulus struggled to revive inflation. Photographer: Alex Kraus/Bloomberg

The European Central Bank (ECB) launched a broad review of its policy on Thursday that was likely to see new president Christine Lagarde redefine the ECB’s main goal and how to achieve it.

The euro zone’s central bank has fallen short of its inflation target of just under 2 per cent for years despite increasingly aggressive stimulus measures under Ms Lagarde’s predecessor, Mario Draghi.

ECB rate-setters did not make any policy change on Thursday, simply standing by their pledge to keep buying bonds and, if needed, cut interest rates until price growth in the euro zone heads back to their goal.

They did, however, announce the start of the ECB’s first strategic review since 2003, which will last for most of the year and span topics from the inflation target to digital money and the fight against climate change.

“The Governing Council also decided to launch a review of the ECB’s monetary policy strategy,” the ECB said in a statement.

Ms Lagarde was expected to provide more details about the scope of the review at her second news conference as the central bank’s chief. Investors will be looking for clues to whether the review will see Ms Lagarde cement Draghi’s legacy of monetary largesse, or if she will use it to heed worries that years of easy credit have fuelled financial bubbles.– Reuters