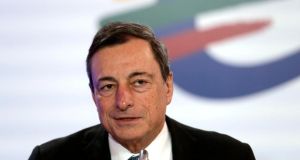 ECB president Draghi repeated he’s ready to expand the bank’s balance sheet by as much as €1 trillion to beat back the threat of deflation.

Mario Draghi and Jens Weidmann are clashing anew over how much more stimulus the ailing euro-area economy needs from the European Central Bank. As Europe’s woes again proved the chief concern at weekend meetings of the International Monetary Fund in Washington, ECB president Draghi repeated he’s ready to expand the ECB’s balance sheet by as much as €1 trillion to beat back the threat of deflation.

Bundesbank head Weidmann responded by saying that a target value isn’t set in stone. The differences at the heart of policy making risk leaving the ECB hamstrung as the region’s economy stalls and inflation fades further from the central bank’s target of just below 2 per cent. History suggests Draghi will ultimately prevail over his German colleague.

“There’s an enormous conflict within the Governing Council on what the ECB should do,” said Joerg Kraemer, chief economist at Commerzbank AG in Frankfurt. “Clearly, it’s Draghi against Weidmann once again. In the end, Draghi will get his way and we will see quantitative easing next year.”

The ECB is swelling its balance sheet as it seeks to revive inflation of 0.3 percent, the lowest in almost five years. By buying private-sector assets, as it plans to do from this month, or continuing to accept collateral from banks in return for cheap loans, it is pushing liquidity into the economy. Still unresolved is if it will ultimately buy sovereign debt, a taboo subject in Germany where politicians worry it amounts to financing governments and removing pressure on them to act.

Building up assets is the last monetary tool the ECB has left after it cut interest rates to a record low, Draghi said on Oct. 11 in Washington. Action taken so far pushed the euro as low as $1.2501 this month, the least since 2012. The ECB’s balance sheet now stands at €2.05 trillion, below the 2012 peak of €3.1 trillion and €2.7 trillion at the start of that year. “I gave you a kind of ballpark figure, say about the size the balance sheet had at the start of 2012,” Draghi told reporters. Weidmann responded within minutes. “I don’t need to explain to you that there has been communicated a certain target value for the balance sheet,” he said. “How formal this target value is, that’s a different question.”

The Bundesbank head is concerned that a balance-sheet target may lead to the ECB paying too much for assets under its programs to purchase asset-backed securities and covered bonds, he said on Oct. 9.

Asked about differing opinions between Draghi and Weidmann and within the Governing Council, an ECB spokesman said it is natural that policy makers hold a range of views which they discuss together at regular meetings in a collegiate environment. A Bundesbank spokesman said that while Weidmann opposed the decisions on ABS purchases in September and October, he agreed to far-reaching measures in June. Instead of debating personal relationships, Weidmann prefers to argue about substance, he said. In more heated language, Germany’s Focus magazine reported, without citing anyone, that Draghi finds cooperating with Weidmann has become “almost impossible” and that he no longer divulges his plans to him beforehand.

The euro-area re-emerged as the main worry of officials at the IMF’s annual meeting as they fret about the outlook for global growth. The IMF last week cut its euro-area growth forecast to 0.8 per cent for 2014.

“There was too much complacency about the euro zone getting out of its crisis,” said Nouriel Roubini, chairman of Roubini Global Economics LLC in New York. “The center of tension is another downturn in the euro zone.” The clash between the 67-year-old Italian ECB president and the 46-year-old German is only the latest in a series dating back to Europe’s sovereign debt turmoil. Weidmann was one of the officials to oppose a plan to buy asset-backed securities before the end of this year. He also objected to an interest rate cut last November and an unlimited bond-buying program in 2012. The fight’s climax may be nearing as the ECB comes closer to having to decide whether to purchase government bonds.

Draghi emphasised this month that a decision may come “in the coming months, not coming years” and repeated in Washington that the bank is open to more unconventional measures if needed. Weidmann says the time for this option hasn’t yet arrived.

There are some areas of agreement between Draghi and Weidmann, the representative of Europe’s most powerful economy. Both want countries such as Italy or France to increase labor- market flexibility and reduce the level of government debt and each say that monetary policy can’t be a panacea for the region’s pain. “Where there is unanimity is on what monetary policy alone can achieve,” said Michala Marcussen, global head of economics at Societe Generale SA in London. “What they all keep saying is there needs to be a concerted effort on structural reform and a more coordinated fiscal response.”

Draghi told governments he is “uncertain that there will be very good times ahead if we do not reform now” and warned politicians that failure to act would cost them the support of voters. While the ECB president can count on German support on his call for economic overhauls, Wolfgang Schaeuble, the country’s finance minister warned against easing fiscal discipline and spoke out against more central-bank stimulus, adding that there’s no threat of deflation in the region. He did say a “clear weakening” of the German economy will prompt more government investment. “With monetary policy you can’t solve the problems, you have to solve it with the decisions by national governments because we have no fiscal and economic union,” Schaeuble said. “Monetary policy can only accommodate, it can buy time.”

1 How much state pension will I get next year?
2 Up or down – how much is your Local Property Tax this year?
3 Am I crazy to consider switching to an Ulster Bank mortgage?
4 Housing crisis here to stay in absence of big rethink, industry warns
5 PTSB plays down Ulster Bank talk as it sells €1.4bn of loans
6 Avolon appoints Paul Geaney as chief risk officer
7 Brexit to curb services trade with UK, accountants group warns
8 Intel rival AMD targets 5g markets with Xilinx purchase
9 Ghost newspapers and zombie brands are stalking the media
10 Irish tech company Asavie acquired by Nasdaq-listed Akamai
Real news has value SUBSCRIBE