Crisis news ratings, robots that care and ‘Donald who?’

Planet Business: From Vegas to the couch 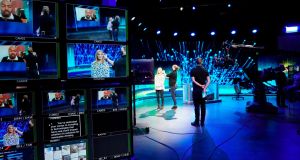 Image of the week: Virtual Vegas

The Consumer Electronics Show (CES) is usually a festival of robots, curved television screens and robots with curved television screens that sprawls all over the Las Vegas strip and has more sideshows than attendees can shake a Bluetooth-enabled stick at. This year, however, there are no attendees, and the Consumer Technology Association that organises the mega-event has instead being holding a rather more subdued “all digital” show, filming its exhibitors’ big tech reveals from a media hub while glossily dubbing it a “new immersive experience”. Oh, for the old immersive experience, even the most CES-weary have concluded. The in-vogue robots for 2021, meanwhile, are the ones that can act as pandemic “heroes” – otherwise known as carers.

Average audience for the bulletin on St Patrick’s Day, exceeded last year only by The Late Late Toy Show and the Leo Varadkar emergency Covid-19 broadcast that preceded the news that night.

Place the 9pm news bulletin managed in the annual TV chart for the halcyon days of 2019, when its most-watched edition was consumed by a mere 572,000 people.

Getting to know: Pat Gelsinger

Currently the head of software company VMware, Pat Gelsinger was this week “thrilled and humbled” to be named the next chief executive of chipmaker and major Irish employer Intel. Gelsinger, who replaces Bob Swan from February 15th, first joined Intel aged 18 when he was fresh out of college and stayed for 30 years, so his appointment is akin to coming back “home”, he told his new workforce on Wednesday. “I’m sure you will have many questions about what is to come, and I look forward to hearing them, even if I won’t have all the answers on day one,” he said – a line that could be copied-and-pasted by all new bosses. “I believe we all work for God, not for a boss or for the president of the company,” the devout Christian was also once quoted as saying, which is a good one for employees to save in their “excuses” folder.

Social media companies aren’t the only ones cutting their ties with Donald Trump and his dwindling band of loyalists. A whole gamut of organisations are making their feelings clear just days before he loses power anyway.

1. Deutsche Bank. The German bank was at one point the only major bank prepared to advance the bankrupt-prone Trump Organisation money. Not any more, apparently.

2. Stripe. The Collison brothers’ payments company became one of the first to say it would not process donations to the Trump campaign.

3. Coca-Cola. It wants to teach the world to sing, not chant “stop the steal”, so it is freezing its political donations for now, with the exception of a $50,000 cash donation for the inauguration and $60,000 worth of commemorative bottles.

4. The PGA. The US Professional Golfers’ Association has changed its mind about playing its 2022 at Trump’s New Jersey course, saying it had become clear that doing so would be “detrimental” to its brand.

5. Luxembourg. Reuters reported on Tuesday that outgoing US secretary of state Mike Pompeo had cancelled his trip to Europe after EU officials and Luxembourg’s foreign minister were, alas, washing their hair.