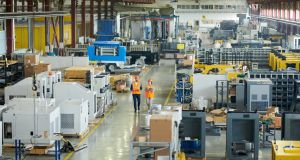 Production also rose in Germany, but was down in France, Italy, Spain and the Netherlands. Photograph: iStock

Industrial production in the Republic led the euro zone in November, with a 52.8 per cent surge in output, Eurostat data has shown. Production across the wider euro zone was much higher than expected during the month, thanks to a sharp rebound in the output of intermediate and capital goods.

The European Union’s statistics office Eurostat said industrial output in the 19 countries sharing the euro rose 2.5 per cent in November against October for a 0.6 per cent year-on-year decline.

Economists polled by Reuters had expected a modest 0.2 per cent monthly rise and a 3.3 per cent annual fall.

Ireland was the clear outlier, with a 52.8 per cent surge in industrial output in the month. Production also rose in Germany, but was down in France, Italy, Spain and the Netherlands.

The better than expected result was mainly due to a 7 per cent monthly jump in output of capital goods and a 1.5 per cent monthly rise in intermediate goods, which helped offset falls in the production of energy and durable and non-durable consumer goods.