It’s time for debt forgiveness: anyone worried about ‘moral hazard’ needs to just get over it 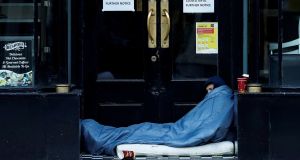 Everybody has a shopping list for the post Covid-19 world. Most of us will demand a better health service, an end to homelessness and lower inequality. Photograph: Jason Cairnduff/Reuters

Everybody has a shopping list for the post-Covid-19 world. Most of us will demand a better health service, an end to homelessness and lower inequality. Each of us has our own hopes. My own wish list, inevitably idiosyncratic, would feature a resurgence of the radical centre.

Ideology disfigures politics. The more extreme the ideas the more damage they do. A nodding acquaintance with the history of the 20th century should be enough to persuade anyone that extremist politics, whether of the traditional left or right, or systems of apartheid, or religiously based fundamentalism, always lead to economic devastation and violent repression.

An old fashioned left-winger, Jeremy Corbyn, retired in recent days as leader of the UK’s Labour Party. A socialist with ideas frozen in 1970s aspic, he embodied all that is wrong with ideologues, even those of a relatively mild variety. For a politician who never got his hands on any levers of power, he caused an extraordinary degree of harm. He was the yin to Boris Johnson’s yang.

The British opposition party went missing during the most crucial political and economic debate of the past 75 years. The hijacking of the Labour Party by extremists permitted the same thing to happen to the Tories. Corbyn’s role in Brexit was bad enough. But he also allowed a bunch of right-wing hacks, newspaper columnists and after-dinner speakers to take control of Britain. The only surprise is the way in which everyone is astonished by the incompetence of the UK government’s handling of the covid-19 crisis.

A crude characterisation of the left-right divide focuses on attitudes towards the market. Leftists see public sector provision as the default way of organising the economy. A traditional right-winger reveres the market and sees the government only as a source of bureaucracy and inefficiency, and as an innovation-free zone.

Centrists merely ask a question: what works best? And, unlike the ideologues, think the answer is, ‘it all depends’. It’s obvious that the public sector is the answer to the crisis that we currently face. But that isn’t always the case. It really does all depend. And the radical centrist is prepared to acknowledge that both the public and private sectors can be the answer. Anyone who has worked in a large private company knows all about stultifying bureaucracy and the beauty of market forces. Public sector scientists can point to all the great inventions made by the state while civil servants everywhere know how true to life is Yes, Minister.

Radical centrism is, naturally enough, attacked from all sides. Tony Blair’s tragedy, the Iraq war, destroyed his reputation and gave “the third way” a bad, if not toxic, name. Which was a real pity: a centrist who won three elections, transformed the British economy and boosted spending on health and welfare is mocked and vilified by many people who say they want exactly what Blair delivered. Trudeau in Canada and Macron in France are contemporary examples of what centrists can (and cannot) achieve.

“Ideas without illusions”, a phrase attributed to John F Kennedy, best captures radical centrism. So the challenge to centrists is to come up with ideas that stand a chance of working. Ideas that answer the question, ‘how on earth are we going to get economies started again?’

Of the many economic problems we face, two of the biggest are loss of income and increasing debt. Government policies have so far been mostly directed to replacing some of the lost income. This is welcome but more will be needed. Debt has received less attention. My hunch is that debt forgiveness of one kind or another will help determine the shape and speed of any recovery. A small hint of what lies ahead was given by the UK government’s recent decision to cancel £13.4 billion (€15.2billion) of NHS debt. More of this kind of thing is inevitable.

The longer the crisis lasts the greater the difficulty in restarting economies. The health crisis will result in permanent economic damage, particularly so if debt problems result in bankruptcies. The task, therefore, is to prevent those bankruptcies. A number of radical ideas suggest themselves: a reform of bankruptcy law such that debtors are given much greater protection from creditors.

But, if they don’t get their money back, creditors will also need help: this is where the prospect of another financial sector bailout rears its ugly head. Creditors are often banks of one kind or another. Additionally, outright debt forgiveness is also going to happen. Anyone worried about “moral hazard” (undeserving debtors getting away with financial murder) needs to lie down and get over it.

All these ideas end up with the government providing the money. A lot more than is currently being contemplated.

Centrists pride themselves on their pragmatism and, in contrast to ideologues, their ability to change their minds in light of new information. One key lesson of the crisis is that we have a private sector too devoted to cost-cutting. Too many CEOs achieve greatness by cutting rather than investing or innovating. We need to change the incentive structures present in many of our companies. Those short supply chains are good for profits but have too many vulnerabilities.

That’s not necessarily an argument for public sector provision. Perhaps it’s a forecast that ESG (environmental, social and governance) investing will now move from niche to mainstream.