Construction should be ‘essential’ if country moved to Level 4, says CIF 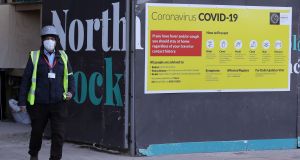 The representative body for construction has written to senior Government Ministers calling on them to designate the industry as essential and thus allowed to continue operating if further restrictions are applied. The current Government plan does not outline what sectors would be seen as essential, but in the initial shutdown the construction sector was largely closed.

The Construction Industry Federation wrote to the Taoiseach and Tánaiste last Monday saying that shutting the industry would immediately hit the delivery of essential housing and infrastructure. The federation says that while project completions remain strong, the initiation of new projects will slow if there is not clarity that the sector can remain open.

The federation says it has worked to promote new safety guidelines through new operating procedures. Its letter quotes HSE data showing there were nine outbreaks on Ireland’s 1,100 constrictions sites since July, involving 53 cases, of which 20 were symptomatic and one was admitted to hospital. Building of social housing was allowed to open before the initial lockdown was lifted.

“The industry has proven it can operate since the initial relaxation with minimal risk to employees, their families and the wider community,” the letter says. Companies and the CIF are pilot-testing a bluetooth social distancing and contract-tracing technology across the industry. A new national awareness campaign promoting Covid-19 safety is under way.

Under Government guidelines, all but essential businesses would close at Level 4 – this could mean closure for non-food retail, parts of manufacturing and the leisure sector, as well as construction, depending on what is deemed “essential”.

Business sources say there is a close focus now on the updated Government programme referring to “designated” employees who would be allowed to continue to go to work if restrictions intensify. It is not clear from published documents who would be included.

The CIF letter said “ the multiplier effects of the construction industry operating on the wider economy and society make a compelling case to ensure it can operate at Level 4”.

It said figures from EY and DKM economic consultants showed the previous shutdown led to a 35 per cent drop in activity in construction, equating to €9 billion in output at 2019 levels. Housing output estimates have been cut from 23,000 to 16,000-18,000 for 2020. “CSO data from Quarter 2 shows that housing commencements dropped 45 per cent year on year and this might lead to even further reductions in output in 2021.”

Meanwhile, construction activity showed signs it was approaching stabilisation in the Republic in September, having spent the summer recovering from the Covid-19 lockdown earlier in the year, according to Ulster Bank.

The Ulster Bank construction purchasing managers’ index (PMI), a seasonally adjusted index designed to track changes in construction activity, rose to 47.0 in September from 44.0 in August. Still, a reading below 50 indicates activity is contracting.

Although posting below the 50.0 no-change mark for the second month running, the reading suggested a move towards stabilisation in activity, Ulster Bank said.

The index had collapsed to just 4.5 in April as construction ground to a halt due to Covid-19 restrictions.

“The rate of decline in overall activity was significantly less-pronounced than seen in April and May, and the pace of contraction did ease somewhat relative to August, helped by developments in commercial activity,” said Ulster Bank economist Simon Barry.

“However, construction firms – similar to their counterparts in manufacturing and services – reported that Covid-19 impacts continue to weigh on the sector, with the pandemic cited as a headwind in relation to trends in activity, new business and hiring.”

Industry players also spoke in September of stock shortages at suppliers, and difficulties in sourcing items which have contributed to a “notable acceleration in input cost inflation”, Mr Barry said.

“In addition to the pandemic, the anecdotes from the September results also cited Brexit as a cause for renewed concern.”