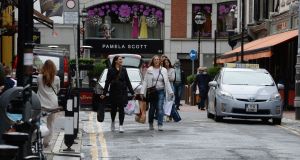 The forecasts are drawn up on the basis of no vaccine being available next year. File photograph: The Irish Times

The latest economic forecasts from the Department of Finance published ahead of Budget 2021 show the risk of the hoped-for bounceback in the economy next year being constrained by the lingering pandemic and by the UK leaving the EU trading bloc without a deal.

Even if this happens, the economy is expected to grow and create jobs , but at a more modest rates than earlier forecasts had anticipated. And unemployment will remain high, which is bound to have a major impact on politics, too.

The headline figure shows less of an impact than expected to the economy overall this year – except in the jobs market – but a more muted bounceback in 2021.

The strength of exports this year means that the fall in gross domestic product (GDP) is now forecast to be a modest 2.5 per cent – well below the department’s earlier forecasts of a 10.5 per cent fall.

This is largely due to a much stronger performance from exports of phamaceuticals, chemicals and medical devices than had been anticipated. Exports, as they did in the last crisis, are helping.

This has supported tax revenues and, to an extent, employment. But the domestic economy has taken a heavy hit. The department’s measure of the domestic economy – modified domestic demand – is now expected to drop by 6.5 per cent, well below the April estimate of a 15 per cent collapse but still a big drop.

And it is clear that, despite the less-than-expected fall in activity levels, the impact on jobs has been worse than anticipated, with a drop of 13.8 per cent anticipated in total employment this year. That is more than 300,000 fewer jobs in the economy, a massive drop – and an unemployment rate for 2020 averaging 15.9 per cent.

The defining impact of this recession has been on the jobs market and it is no surprise to see the department warning of long-term so-called scarring impacts – in other words long-term economic damage.

While the April forecasts had foreseen a big collapse in activity followed by a substantial bounce in 2021, we are now wiser about the impact of the pandemic and there is more concern that it will linger.

The forecasts are drawn up on the basis of no vaccine being available next year, continued social distancing – affecting consumer facing sectors – and an impact on confidence, meaning reduced consumer spending and business investment.

Against this backdrop, the department now sees a rise of 3.9 per cent in domestic demand next year and a 1.4 per cent increase in GDP, the latter hit by the impact of a no-trade-deal Brexit, below earlier estimates.

This would still be enough to see a rebound in the jobs market with total employment rising by close to 150,000. But such is the scale of the damage that the unemployment rate would remain stuck at 10.7 per cent. We are facing a jobs crisis, particularly among the younger workforce.

The figures also assume that the EU and UK do not reach a Brexit trade deal, leading to a potentially chaotic situation and problems for exporters in sectors like food from new tariff barriers. This is assumed to knock more than 2.5 per cent off GDP next year and more in subsequent years.

Three final observations are worth making.

One is that the low growth forecast will hit tax revenues next year and so borrowing will be high and there will still not be a lot of spare cash beyond what is needed to tackle Covid-19, unless borrowing is let rise yet further.

Second, the forecasts are made on the basis of no vaccine appearing and the worst possible Brexit outcome and so there is some upside if developments go in a better direction.

Third, we have already seen that it is near impossible to forecast the precise direction of the economy and so these latest numbers come with more than the usual level of health warnings.