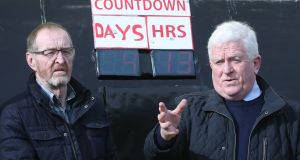 Members of Border Communities Against Brexit unveil a Brexit countdown clock at Jonesborough, on the Border between Dundalk and Newry. Photograph: Niall Carson/PA Wire

A no-deal Brexit will derail the Government’s plan for tax cuts in the next budget, the Economic and Social Research Institute (ESRI) has indicated.

In its latest quarterly economic commentary, the think tank said economic growth would be slashed by more than two-thirds to 1.2 per cent this year if the UK crashes out of the EU without a deal and there is a disruption to trade.

Such a scenario would also see the Government’s budget surplus of last year move back into a deficit of 0.5 per cent, or €1.5 billion, necessitating further borrowing, it said.

A disorderly Brexit would put the Government’s budgetary position under “severe strain”, the ESRI’s Kieran McQuinn said. “It curtails the room for manoeuvre very significantly.”

At his party’s national conference at the weekend, Taoiseach Leo Varadkar pledged to reduce the tax burden on middle-income earners, who, he said, are hitting the top rate of tax at too low a threshold.

Speaking before the Oireachtas Joint Committee on Finance, Public Expenditure and Reform on Tuesday, Central Bank governor Philip Lane said that “in the aggregate Ireland will be worse off under any form of Brexit”.

Certain sectors, such as export-oriented financial services, may benefit “but that’s a minor side effect compared to the wider damage,” he said.

Even if the UK remains in the EU this year, the ESRI is predicting the Government will run a small budget deficit for 2019. It said the surprise budget surplus last year, the first in more than a decade, came on the back of stronger-than-expected corporation tax receipts, which are unlikely to be repeated this year.

As a result, the ESRI is advocating a neutral budget in October – one that would neither inflate nor contract the economy. This does not preclude tax cuts but suggests they should be funded through raising taxes or cutting spending elsewhere.

In its report the institute said it expected the Irish economy to grow 3.8 per cent this year, down from a forecast of 4.2 per cent previously. The forecast assumes the UK will remain a member of the EU, an assumption that is steeped in uncertainty.

The slower pace of growth reflects the slowdown observed in the global and European economies since the end of last year, the ESRI said. “The present year has seen international sources of growth cool; the underlying weaknesses in the Chinese economy along with the deterioration in the trade relationship between the US and China have contributed to a reduction in the global outlook,” it said.

“The recovery in the euro area has also stalled somewhat. Inevitably, this will impact the domestic economy, with the contribution of the trade balance to growth set to decline,” it said.

The uncertainty around Brexit has also coincided with an increased rejection rate for SME loan applications, it said.

Overall the ESRI’s commentary paints a positive picture of the Irish economy. It said that while the headline gross domestic product (GDP) was distorted by the activities of certain multinationals, “the underlying performance of the economy is still remarkably strong”.

“Increases in taxation receipts, even aside from corporation taxes and the ongoing dynamic performance of the labour market, are compelling evidence of this,” it said.

It predicted employment in the Irish economy would hit a record 2.3 million this year.