Concern that Budget did little for self-employed, entrepreneurs 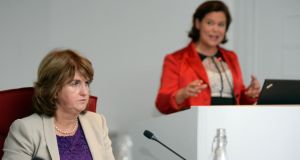 Budget 2015 got a cautious welcome at a debate hosted by Ibec and the Women for Election campaign group on Thursday, but there were complaints that it had failed to provide incentives for either the self-employed or for entrepreneurs.

Among the speakers present at the post-Budget briefing event was Tánaiste and Minister for Social Protection Joan Burton who claimed the Government had delivered a balanced Budget that was focused on economic growth.

“There’s no political party here could promise that the kind of catastrophic loss the country suffered because of the collapse of the banks can be recovered in one Budget cycle. It’s going to take a series of budgets needed to bring about a full recovery,” she said.

Most panellists agreed that the ending of the controversial “double Irish” tax arrangement was a positive move but there was disagreement on whether other measures introduced in the Budget were as successful.

Ms Power described the Budget as disappointing, particularly from an educational point of view. She also said her party disagreed with the decision to cut income tax. Ms McDonald rejected claims the Budget was a vehicle for growth and criticised attempts to differentiate between the economy and society.

“Assertions around the ending of austerity were very much the mood music for the introduction of this Budget. There are some who would argue it was a Budget for recovery but I take a very different perspective on it,” she said.

Addressing concerns from audience members about the lack of measures for entrepreneurs, Ms Collins said she had spoken to Minister for Finance Michael Noonan this week about the issue and said she hoped it would be addressed in the forthcoming Finance Bill.

1 Solar panels: How do they work - and are they worth it?
2 Bank leaked my loan request to family who tried to rip me off
3 Revolut valued at $5.5bn after latest fundraising
4 Kingspan and Greencore executives sell €11m in shares
5 When the Chemistry no longer works – the closing of a leading Irish ad agency
6 Ryanair and Aer Lingus monitor impact of coronavirus on travel to Italy
7 Longview seeks permission for 753 homes in Cork’s outskirts
8 Can I see my father’s previous wills?
9 McEvaddy brothers to continue to back Irish aviation firm
10 Over $12m from sale of Walford handed over in Sean Dunne bankruptcy case
Real news has value SUBSCRIBE