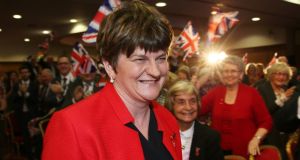 Ireland may lose out in the race to encourage UK businesses to move here in the wake of Brexit due to competitive and infrastructural failings, Dublin Chamber of Commerce (DCC) has warned.

Speaking ahead of today’s all-island forum on Brexit, the chamber claimed the Government had still not woken up to the fact that it needs to be spending more on infrastructure.

DCC public affairs manager Graeme McQueen said companies were looking at Ireland, and at Dublin in particular, to see if it had the capacity to accommodate growth.

“They’re looking here to see whether there is housing available for their staff, whether there is office space available and whether we’ve got the transport infrastructure but they’re probably not seeing enough impetus,” he said.

Mr McQueen noted that only €175 million a year was being spent on Dublin’s transport infrastructure, when cities like London and Manchester were spending two and three times as much.

“If we’re serious about taking advantage of opportunities in the wake of Brexit, we need to be responsive and at the moment we’re not,” he said.

Mr McQueen also highlighted various aspects of the tax code, which he claimed put Ireland at a competitive disadvantage.

The forum , which will be chaired by Taoiseach Enda Kenny, brings together civic society groups, trade unions, business lobbies and political parties.

However, the proceedings have been overshadowed by the Democratic Unionist Party’s decision not to attend and by the unprecedented attack on Dublin’s Brexit stance by party leader and Northern Ireland First Minister Arlene Foster.

At the DUP’s annual party conference at the weekend, Ms Foster claimed the Republic was “poaching” investment at the North’s expense while political instability in the Irish Government, rather than concern for Northern Ireland, was driving the Republic’s post-Brexit strategy.

Business groups are likely to use the forum to press for an all-island investment agenda to address the potential impact of Brexit on both economies.

Employer’s group Ibec said the focus of the dialogue should be on the need for momentum behind a shared ambition for infrastructure and connectivity, and on the preservation of the common labour market between both countries.

“The political settlement in the North needs to be afforded a special status, along with a continued commitment to the development of the all-island economy,” Ibec chief executive Danny McCoy said.

Ian Talbot of Chambers Ireland claimed the issue of competitiveness had slipped down the national agenda despite the challenges posed by Brexit.

“Irish companies will be forced to compete fiercely for the British market, and against British-based companies for international markets. We must focus on the costs we can control,” he said.

“After a period of restraint across local government, we must continue to hold down commercial rates, and use that system to incentivise sectors and regions particularly at risk,” Mr Talbot said.

Paddy Malone of the Dundalk Chamber of Commerce said the organisation had already noticed a significant fall-off in shoppers from the North and that it would be calling for Dundalk to be included in the Living City Initiative, a tax incentive scheme which promotes urban renewal, and for a reduction in commercial and retail rates along the Border.

While businesses will push for various post-Brexit supports, a survey by the British Irish Chamber of Commerce and the Chartered Institute of Management Accountants found “clarity of Brexit terms” and “unbiased information” were the top priorities for most firms.

John Comer, president of the Irish Creamery Milk Suppliers’ Association, called for all-party recognition that €5 billion worth of food exports to the UK are “a vital national interest”.