Cliff Taylor: Key implications for Ireland of Italy’s No vote

Italian Prime Minister Matteo Renzi has said he will resign following a defeat in a referendum on constitutional reform. Video: Reuters 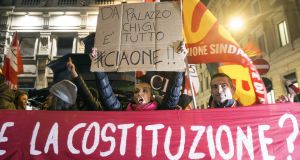 Demonstrators hold banners and shout as they protest against Italy’s prime minister Matteo Renzi, who has now said he will resign, outside Chigi Palace in Rome, Italy, on Monday, December 5th, 2016. Photograph: Alessia Pierdomenico/Bloomberg

The “No” vote which has come through in the Italian constitutional referendum had been widely forecast by polls and political commentators.

But the extent of the defeat had not been, and the immediate resignation of the Italian prime minister only serves to underline the uncertainties.

The fall-out for the markets and Europe’s economies is unclear, but some upheaval may now be in prospect, particularly given the scale of the vote and the political and financial uncertainty facing Italy.

The first key issue to watch will be fears about the Italian banking system, where shares are down sharply at the opening today before recovering ground. Beyond that wider concerns about Italy’s economy and rising opposition to euro membership in Italy - and other EU countries heading into elections such as France - will come into focus. The euro dropped sharply overnight in response to the vote, though by early European trading it had clawed back much of its losses.

In short, we can expect some market drama and volatility and the banking sector will be the initial focus, just as so often before in euro dramas.

A lot will depend on the political fallout in Italy, which will take time to unfold in full. The next move is up to the Italian president – there has been speculation of a caretaker government for a period, or even a non-elected technocratic administration, before likely elections next year.

Either way, the key issue to watch from a market point of view will be whether the leading opposition Five Star party – which has said it would hold a referendum on euro membership – is seen as being positioned to take power .

Its leader Beppe Grillo has certainly won a big victory. However political analysts are divided on how this could play out – and just because Grillo was on the winning side in the referendum vote does not mean he would necessarily hold power after a general election, which is not due in any case until 2018.

As a euro member and one relying on the markets to borrow money, this all has implications for Ireland.

Here are the three things to watch.

1. The euro: The currency has weakened in recent weeks in the run up to the referendum and weakened in Asia as the results started to come through. By the early European trading it had steaded a bit and regained a lot of its overnight losses. More volatility is likely to lie ahead.

Investors have speculated that in the short term the “No” vote will persuade the European Central Bank to extend its programme of monetary stimulus. As the ECB is effectively printing money through this programme, extending it could keep the currency weak.

In recent weeks, euro weakness has already contributed to a drop in the rate against sterling from over 90p to below 84p, providing some relief for Irish exporters hit by the fall in the UK currency after the Brexit vote and companies competing with British firms on the Irish market . This morning the euro fell further to below 83.5p sterling, before recovering to around 84p.

The euro exchange rate will be a key thing to watch in the days ahead - as we saw following Brexit and the Trump election, currency moves are not always predictable and can swing in response to political developements.

The ECB will announce its latest policy moves next Thursday and may extend its programme of monetary stimulus beyond its current finish date next March.

Beyond that, wider fears about political support for an Italian exit from the euro and speculation about its future will now loom large in the weeks ahead.

This is why how this all plays in Italian politics is now so vital.

2. The bond markets: If there are fears about financial stability and the future of the euro, then this will hit the markets for government bonds.

Investors would move money out of Italy and other countries perceived to be riskier, and towards safer havens, particularly Germany. Already this morning Italian bonds have been hit and 10 year interest rates have gone back over 2 per cent.

Fears over the Italian referendum have contributed to weakness in European bond markets in recent weeks – though a big international sell-off following the Trump election is another factor.

Markets are taking some comfort from the likelihood that the ECB would step in to buy Italian bonds in the event of a big sell-off as part of its ongoing bond-buying programme.

However, Italian bond markets and those of other peripheral countries – including Ireland – will be closely watched and could face weakness.

Already, Irish long-term bond interest rates have risen from a low this year of under 0.4 per cent to around 0.9 per cent and they are slightly weaker again this in early trading on Monday.

Any sustained rise would increase the cost to the National Treasury Management Agency of raising cash to fund the exchequer and debt refinancing – though of course rates do remain very low by historical standards.

The big “No” vote looks set to hit Italian bank shares and make it more difficult for the sector to restructure.

The world’s oldest bank, Monte dei Paschi di Siena, is in the eye of the storm. Judged as the weakest of the lenders in recent ECB stress tests, it is half-way through a financial restructuring which could now be hard to complete. Its shares were sharply lower as the Milan market opened this morning though they then quickly recovered.

In particular, it now remains to be seen whether new equity investors, including the Qatar government, will go ahead with a planned investment of up to €5 billion.

If not, the Italian taxpayer may have to step in , bringing huge complications because many small investors who hold bank bonds effectively as part of their deposits could then face losses.

Unicredit, the biggest Italian bank, is also planning a major financial restructuring which will now be more difficult to complete and a range of other smaller bankers could also be vulnerable. The shares of the entire Italian banking sector were opening sharply lower this morning, though they then bounced in volatile trading.

The key issue to watch now is whether the planned restructuring can continue, or whether the Italian banking sector faces immediate pressures, leading to urgent consultations involving the European Commission and the ECB.

While this will take time to play out, the Irish Government had been hoping for calm markets towards banks in 2017, to allow it the option to start to sell down bank shares.

Any sustained upheaval in banking markets could also increase the price to Irish banks of raising money and slow their financial improvement.

While AIB’s share price is close to meaningless because the State holds virtually all the shares, the price of Bank of Ireland and Permanent TSB stock will be closely watched. Financial shares across Europe may well be in for a torrid time.

1 State’s biggest landlord records 30% rise in rental income
2 MSD buys Takeda biologics plant in Dunboyne
3 Irish tourism must also help itself to survive the pandemic
4 Facebook agrees Irish wind-farm deal with Brookfield in Tipperary
5 ‘Saudi Arabia is where the opportunities will happen in future’
6 Prosecutors suspect Wirecard was looted before collapse
7 What will the office market look like after the great remote working experiment?
8 Refurbished Café en Seine doubled sales to €9.5m before pandemic
9 Trump signs executive orders banning TikTok and WeChat
10 How to build your staff’s resilience while working remotely
Real news has value SUBSCRIBE