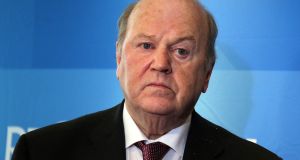 Euro zone finance ministers gather in Brussels on Monday for a meeting that will focus on member states’ budgetary plans for 2017 and the ongoing Greek bailout, as negotiators in Athens seek to finalise the second review of the Greek rescue programme.

With the ramifications of Sunday’s referendum in Italy likely to hang over events, ministers, including Minister for Finance Michael Noonan, will discuss the politically sensitive issue of countries’ adherence to EU debt and deficit rules. Italy has long been one of the harshest critics of the European Commission’s budget policies, with prime minister Matteo Renzi repeatedly calling for some leeway on budget rules, highlighting the political impact on voters of overly harsh debt and deficit targets prescribed by Brussels.

Also under discussion will be a change in the European Commission’s “fiscal stance” outlined last month when the EU’s executive arm called for a 0.5 per cent fiscal expansion across the euro zone next year, which could reach as high as 0.8 per cent in some cases.

The announcement signals a potential shift in EU economic policy away from the economics of fiscal consolidation, but the measure was largely seen as a message to Germany and the Netherlands, which are deemed to have sufficient fiscal space to increase government spending. But in a signal of the political challenges ahead in securing buy-in for a more expansionary fiscal policy, Dutch finance minister and euro group chairman Jeroen Dijsselbloem told the European Parliament at a hearing last week the EU should focus on implementing budget rules rather than proposing fiscal stimulus. Germany has similarly argued that the country’s level of investment is sufficient, arguing that it has increased investment more than the euro zone average in recent years.

The budgets of Spain and Portugal are also likely to be raised during the discussion. Both countries struggled to meet the budget plans set out by Brussels over the last year, but avoided sanctions in a sign the commission is shying away from the threat of punishing individual countries at a time of growing Euroscepticism across Europe.

Ministers will also discuss the latest developments on the Greek bailout, with reports that European Stability Mechanism chief Klaus Regling may present a proposal outlining some short-term debt-relief restructuring for the country.

Though no final decision will be made, a general agreement could pave the way for more specific discussions on debt restructuring in the coming weeks.

The International Monetary Fund has been demanding debt-restructuring measures for Greece as a condition for its participation in the third Greek bailout, which was agreed 15 months ago following months of acrimony between the Syriza-led government of Alexis Tsipras and the country’s European lenders.

Germany and others are still opposed to significant debt relief for Greece, which could emerge as a political issue in next year’s general election campaigns in Germany and the Netherlands.

Officials from the European Commission have been liaising with Greek officials about the implementation of outstanding issues that need to be addressed by Athens to conclude the second review of the bailout programme.

Today’s meeting is the last euro group meeting of the year, increasing pressure on ministers to make progress on the Greek bailout, as the IMF has signalled it will make a decision on its participation by the end of the year.

EU economics commissioner Pierre Moscovici said last week he had held productive talks in Athens during a visit last Monday and Tuesday. “There is still some work to be done . . . I am convinced that we will be able to reach this staff-level agreement. On Monday we should be able to have a discussion which will be very beneficial.” He also said he wanted the IMF on board, promising a “constructive and positive discussion on the restructuring and reprofiling of Greek debt”.