Has the European Commission called time on austerity?

Extra budget leeway for Ireland likely limited, but commission is easing up on the rules 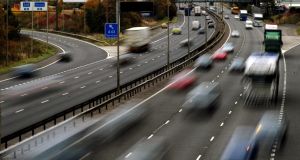 The European Commission may green-light spending on Irish infrastructure.

The European Commission is calling for a programme of fiscal expansion. Is this the end of austerity? And what does it mean for Ireland?

Its statement came on Wednesday, when the commission published a review of the budget programmes put forward by various countries. It called for a fiscal expansion next year of 0.5 per cent of GDP in Europe, saying this was necessary to maintain the recovery.

There was one main target for this: Germany. Europe’s biggest economy is running a budget surplus of more than 0.5 per cent of GDP, and refuses to increase spending, even on infrastructure, as quickly as the commission would like.

Germany could easily do so while staying within EU stability and growth pact rules – and its road infrastructure is creaking. But German public opinion remains in favour of tight budget policy, and the government is constrained by the rise of the fiscally conservative (and anti-EU) AfD party.

On a wider level, the election of Donald Trump and his promises of extra spending have changed the political backdrop. The commission recognises that Europe also needs to do more, and that low ECB interest rates cannot do all the work. But are Europe’s political leaders prepared to follow the commission’s lead ?

The commission is simultaneously calling for expansion while saying the rules, which it oversees, must more or less be followed. Still, there are wider signs of change. The commission decided not to withhold EU funds from Spain and Portugal, as it could have because they breached EU rules. And it did not reject any state’s budget plans for 2017.

Ireland and the rules

What does this mean for Ireland? We are still followed closely from Brussels after our exit from the bailout, even if we are no longer subject to the “corrective” rules for those whose budgets are way out of line. We will have to see how this plays out at a political level, but the commission is calling for countries such as Ireland to “ broadly” follow the rules.

This suggest that they will continue to police the rules, but there may in time be some leeway. You could speculate that the commission might, for example, be willing to green-light some additional spending on infrastructure here, but not to allow extra cash for day-to-day spending such as pay.

Achieving our budget target for this year is not yet guaranteed, and carry-over costs from 2017 tax and spending measures will eat into the room for manoeuvre in the 2018 budget – reducing it by about half to below €600 million on current estimates.

Europe may cut us a bit of a break, but our finances remain tight and the commission it is not telling Ireland to “spend, spend, spend”.

And remember: the Irish budget is still in deficit.

1 Ireland stands to benefit in a big way from investing in public transport
2 ‘The recovery needs to be a full-scale economic renewal’
3 Ryanair expects air fares to fall when flights take off again
4 Small businesses are cannon fodder in zealous anti-virus experiment
5 Michael Smurfit: ‘I asked Trump to invite me to the White House for my 80th birthday’
6 Joint accounts: if one of us dies, can the other access the money?
7 HSBC board rethinks overhaul and seeks even deeper cuts
8 Four things that could help Ireland escape from the Covid-19 recession
9 Brexit, coronavirus and bark beetle pose challenges for Coillte
10 Tax and the Pandemic Unemployment Payment: Your questions answered
Real news has value SUBSCRIBE