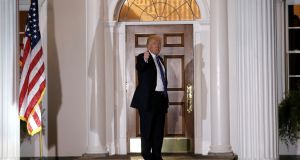 US president-elect Donald Trump: if he was going to make an early move on trade, the TPP was always likely to be a target. Photograph: Reuters/Mike Segar

Donald Trump’s decision to withdraw the US from the Trans Pacific Partnership (TPP), a trade deal involving 12 countries, is his first big economic move.

A lot of heat had been generated about trade during the presidential election campaign, and Hillary Clinton had also been pushed into opposition to the agreement. Yet announcing that the US would withdraw from the TPP is a signal that, in some areas at least, Trump will do just what he said he would.

And it will revive concerns about his wider trade policy, and its impact on the world economy.

If Trump was going to make an early move on trade, the TPP was always likely to be a target. The deal was finalised in late 2015 after more than five years of talks, but is awaiting ratification by all members and so it has not yet come into force.

So, unlike, say, deciding to withdraw from the North American Free Trade Agreement with Canada and Mexico, renouncing TPP does not involve undoing something already in force. But the move is still important politically and economically.

It covers about 40 per cent of world trade, and involves at its centre a deal to cut tariffs – special import taxes on manufactured goods and agricultural products.

US food companies would have got greater access to Asian markets, for example, and in turn Asian clothing and textile firms would have seen the US market open to them.

China is not a party to the deal, though there is some talk today that it might try to step in to take advantage of the vacuum,

The TPP had attracted opposition from anti-globalisation and environmental campaigners, who said it favours big business. The way the TPP rules were drawn, the US had to ratify it for it to come into force.

These big multilateral trade deals have become increasingly contentious, attracting criticism as part of world order which favours big multinationals and does little for general living standards. Trump plugged into this, promising to abandon TPP and also threatening to withdraw from NAFTA and possibly the World Trade Organisation (WTO), the body which oversees world trade.

So the future of a host of trade acronyms are in doubt.

Yet more may be at stake. The gradually reduction of trade barriers is one of the factors underpinning international trade growth over the last 40 years. This was already threatened before Trump came into office, but his policies could have a key impact.

If he follows through on threats to impose import tariffs on the likes of Mexico and China if he feels they are trading unfairly, then some kind of trade wars might be in prospect.

The withdrawal from TPP is an important signal. Trump has done what he said he would do. Now everyone will be waiting to see if it a sign of things to come.