Donohoe says Department of Finance will update economic forecasts next month, but any global slowdown will have implications here 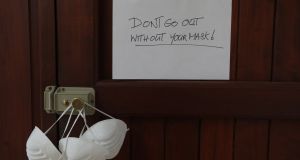 In the UK experts are saying that at the peak of the outbreak in Britain as many as one in five people might be missing from work, implying a massive short-term disruption. Photograph: Eamonn Farrell/RollingNews.ie

As international experts cut forecasts for world economy growth, the risks to the Irish economic outlook for the rest of this year are rising.

Taoiseach Leo Varadkar has said that the Cabinet had been warned of a short-term slowdown in growth or an economic “blip.” However the emergency move by the US Federal Reserve board to cut interest rates by half a point shows that fears are rising internationally of the scale of the likely impact. It may also have a limited impact given that an interest rate cut is not addressing the key issues.

Typically a cut to world growth would feed through to Ireland as demand for Irish exports falls off and confidence is affected. However, the peculiar factors – and uncertainties – we now face make the economic impact of the coronavirus difficult to gauge.

Minister for Finance Paschal Donohoe said on Tuesday that the Department of Finance would update its economic forecasts next month, but that any global slowdown would have implications here.

The vital question is how long it takes for the spread of the virus to peak – and what that peak looks like – and whether confidence can quickly follow that the situation has been contained.

Bank of England governor Mark Carney has said he expects a significant short-term economic shock, bringing “disruption, not destruction”. In other words this could carry a significant economic cost – but it is not 2008 all over again when economies suffered massive long-lasting damage. The emergency action by the Fed shows fears, however, that the disruption could be significant.

For Ireland the virus is likely to hit economic growth this year, even if looking beyond this is very difficult. This introduces a new uncertainty into the talks on the formation of a new government. The forecasts for the public finances on which these talks will be based could be thrown out at least in the short term.

The economic cost comes in two main ways. First, there is a hit to supply into the economy. The virus has already disrupted supply chains coming out of China, which is going to cause some difficulties for manufacturing companies and retailers – even though some of these delays may have eased a bit.

Exporters to China are also having difficulty moving goods – a particular issue for those with perishable products, particularly food. As the virus spreads, difficulties will now grow in trading with other markets too, possibly including the US and UK.

Disruption could also come from companies facing a threat of a virus in their premises. Some service companies may be able to continue to operate with many staff working from home – Google asked many of its Irish staff to do so on Tuesday.

However, absence from a work premises will prove more disruptive in retail companies or the hospitality sector – hotels, restaurants, coffee shops and so on – or in manufacturing. You can’t work from home if you are a waiter or chef, or work on a production line.

It is striking that in the UK experts are saying that at the peak of the outbreak there as many as one in five people might be missing from work, implying a massive short-term disruption.

There will also be a hit to demand as growth is affected across the world – the second main way the virus will hit the economy. This will affect our exporters and also some key sectors at home, notably tourism and travel. Wider restrictions on gatherings – for example, festivals – could also hit consumer spending, as would any moves by the public to avoid eating out, going to the cinema, or whatever.This could affect the economy quickly.

The key issue for Ireland would be demand for exports, with Department of Finance estimates suggesting each 1 per cent fall in export demand cuts GDP growth by around 0.3 of a point in the first year and – if sustained – up to 1 point by year five.

In the case of the virus, demand on world markets could fall significantly , but then could potentially recover if the worst does pass in a few months. Varadkar alluded to the possibility of growth bouncing back after the economic hit – and this was seen with the Sars virus in the early 2000s.

Again, the length of time it takes to control the virus and whether it is seen to be completely contained will be key. On Tuesday Donohoe said that a global slowdown would have consequences for Irish growth, employment and the public finances, but it was still “ too early to say what this would look like”.

We are now seeing international authorities – including the G7 finance ministers and central banks – promise to take “appropriate action”, and the Fed following this with the interest rate cut. Government spending is also likely to rise in many economies.

Yet while economic policy may be able to support demand a bit, it can’t “ fix” the supply chain and workforce issues, though it may be able to help firms to cope with them.

If, as seems likely, the virus does spread here, pressure will grow on the Government to bring forward supports to help get companies over a difficult period.