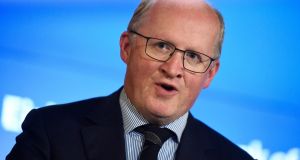 The Republic’s ability to deal with the “immediate cliff edge risks of a hard Brexit” have largely been addressed, Central Bank governor Philip Lane said on Wednesday.

Addressing the European Financial Forum in Dublin, Prof Lane said the country’s ability to deal with sudden financial shocks has improved over the last decade.

Nevertheless, he said a disorderly Brexit would have “immediate disruptive effects that would permeate almost all areas of economic activity”. The agri-food sector, in particular, would be badly affected with rural and Border regions suffering more than others.

The Central Bank previously said a disorderly Brexit could reduce the growth rate of the Irish economy by up to four percentage points.

“In addition to the direct disruption to international trading arrangements, adverse developments in the UK economy have a general spillover impact in Ireland, ” Prof Lane said.

“Given the current favourable forecasts for the economy as a result of domestic demand and the strong non-UK multinational sector, our assessment is that there would still be some positive growth in output this year and next even under a no-deal scenario, but materially lower than in the central forecast,” he said during a speech at Dublin Castle.

Although negative on Brexit’s impact, Prof Lane was confident that our financial system has improved its resilience, something that provides a “vitally important buffer”.

The Central Bank is focusing on ensuring that its contingency plans cover the “unfolding situation”, he added.

“Taken together, the more balanced macroeconomic profile, the restructuring of the Irish banking system, the much-higher capital and liquidity ratios, the decline in the non-performing loan ratio and the more intrusive supervisory regime mean that the capacity to absorb negative shocks is much greater than in the past,” Prof Lane said.

Considering more local concerns, Prof Lane said the outlook for the economy remains “broadly positive, even if some moderation in growth” is on the cards.

“This moderation partly reflects the limits imposed by domestic capacity constraints due to the tightening of conditions in the labour market and current bottlenecks in the housing market,” he said.