Brexit: Sterling rise could be a false dawn – trench warfare of trade talks still to come 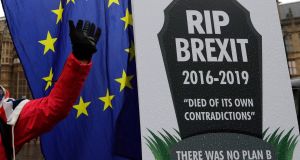 Another clock ticks, zero trust exists and the EU will know exactly what it wants: it will, also, hold all the cards

Sterling has risen because investors believe a benign Brexit is on the cards. I fear that misses what will happen next, even if the Withdrawal Agreement is passed.

Experts in the dark arts of international trade negotiations express bewilderment at the lack of engagement by Brexiteers in the details of trade treaties. There are no examples of any trade talks that have not been long or brutal. To make sense of a typical trade treaty we must embrace mind numbing detail that few people ever come in contact with.

The brutality of trade negotiations usually happens behind closed doors but is nonetheless always evident. Smart, dedicated and well trained people engage in pursuit of their national interests. It can be likened to trench warfare.

The history of the modern global trading system - the World Trade Organisation (WTO) - began in the aftermath of the second World War. A new way of doing things was driven by both memories of the collapse of world trade in the 1930s and the war that quickly followed. Hard Brexiteers increasingly call for Britain to ‘just leave and then trade on WTO rules’.

An example of a clueless Brexiteer being bamboozled by the word ‘tariff’ came last week in a BBC interview of James Delingpole. Andrew Neil asked him some simple questions about post-Brexit trade arrangements. His answers have gone viral: on one level, they are funny. On another, they are terrifying, particularly if they are a pointer to what is about to happen, once the UK leaves.

This week will see further attempts to shape that exit. Details of a different sort are evident in the focus on the arcane minutiae of UK constitutional practice. Amendments to amendments are being discussed alongside calls for a proroguing of Parliament. People who live through history rarely realise it at the time.

The manner of the UK’s leaving is akin to watching a drunk dropping his keys after leaving the pub on a dark night. He only looks for those keys under the light of a lamppost - success is possible but uncertain. With or without the keys, he will get home: what is never known is the path he will take or whether he will successfully enter into his house.

Brexit is like that. We chuckle at the drunk looking for his keys: attempting to pass the Withdrawal Agreement. Nobody thinks about the subsequent journey. No thought is given to what happens at the end of next year. The search for an exit has left us that much closer to the next cliff edge. If something is agreed before the end of March, the current turmoil will be described as the phoney war. The shooting, the trade talks, will then begin. And it will be even more brutal than usual.

During the phoney war the British have conceded at every step of the way. The current impasse over the Border is a direct consequence, bizarrely, of the EU making its only concession: the backstop. It cannot be repeated often enough that the backstop was asked for by Theresa May. The way in which this EU gift to the British has been twisted into ‘German bullying’, as described by one MP this week, has not gone unnoticed.

Europe’s addiction to rules, the law and its own interests cannot be overstated. The British have never got this. (Equally, the EU has never really got British affection for bloody mindedness and dislike of written rules). Just as all the power has rested on the EU side of the negotiating table, so it will be when the trade talks start. Another clock ticks, zero trust exists and the EU will know exactly what it wants: it will, also, hold all the cards.

Sir Ivan Rogers, once Britain’s chief diplomat in Brussels, puts it this way: “The EU is a difficult negotiating partner. It has treated this process as essentially a technocratic one of “de-accession” - the reverse of the process when one joins. That style works on accessions, because it’s an inevitable process of convergence on a known destination - the voluminous EU law book. And the EU then dictates the entire game and exhibits strategic patience.”

Rogers, like anyone else versed in trade negotiations, knows that where you start from matters. And starting from the WTO-baseline, so beloved of the hard Brexiteers, is the worst possible place to start. It really does hand all the negotiating power to Brussels. But to understand this, you have to delve into that detail; the precise nature of that WTO baseline. One of the many weird aspects of what will happen next is that the talks will focus on manufacturing and throw 80 per cent of the British economy, services, under a bus. That, for example, is what a Canada style deal, repeatedly referenced by the Brexiteers, one that took seven years to negotiate, will achieve. Just a detail I guess.

But details matter. Sterling has risen because of a bet that Brexit will be not as bad as once feared. That, I think, is a result of a short-term focus on the next eight weeks. It blithely ignores what will happen after that, even if we get a Withdrawal Agreement. The more sterling rises, the more I worry that it will once again be looking into an abyss.