Chris Johns: A massive stimulus will be needed once economies are off life support 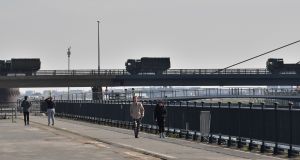 British army truck deploying in London. The nearest Britain got to revolution was the electorate’s rejection of Churchill and the creation of the welfare state. It could have been worse

The length and duration of the global recession will be determined mostly by the evolution of the virus. It’s natural but wrong to describe the emergency policy measures seen in many countries as “economic stimulus packages”’. Economies have been deliberately placed in deep comas: the vast sums of money that will be spent in the coming weeks and months are truly unprecedented. But this cash is for life support rather than stimulus.

That life support will, sooner or later, be switched off: it’s at that point that even more money will be needed. Stimulus will be desperately required, but now is not the time. If you thought the bill is looking large, just wait a while.

The decision to end life support will be taken, we hope, when the virus is deemed to be under some semblance of control, if not actually at an end. Time is of the essence.

Most obviously a relatively quick end to the medical emergency is to be desired for its own sake: the human costs dwarf the economics. But the longer this goes on the bigger and more difficult will be the economic questions.

It’s not just the bill that will get larger. We simply don’t know what will happen when the induced economic coma is brought to an end: the longer this goes on, the more difficult will be resuscitation, let alone stimulus.

That’s not an argument for premature resuscitation, by the way. The not in that there is a trade-off between the virus and the economy is bogus.

How different does the future look? Soldiers returning from war in 1945 were excited to be demobilised, but many noticed the grim determination with which the authorities separated the men from their guns. While there are obvious reasons to disarm excited young soldiers, stories circulated about official fears of violent protest or even revolution.

Those returning warriors were determined to avoid any return to the economics and politics of the 1930s. Some officials were worried about how such sentiment might evolve. The nearest Britain got to revolution was the electorate’s rejection of Churchill and the creation of the welfare state. It could have been worse. Is revolution in our future?

Despite official efforts some companies will not reawaken. Bankruptcies are inevitable. Partial or full nationalisations are probable. The role of the state, not least its size, has changed, and will do so again.

Fiscal constraints, completely absent today, will return: explaining that will be a thankless task. I’d bet that everyone is looking at hefty tax rises in the years ahead.

I’d also wager that we won’t be able to take that much fiscal retrenchment, politically and socially. Anything that could be labelled “austerity” will, for obvious reasons, be toxic.

That only leaves monetary financing. The financial crisis gave us money printing by central banks but only via smoke and mirrors. The ECB could never admit to rolling the printing presses to directly fund government spending: that’s illegal. I don’t think anyone is too worried this time around.

The reason why the ECB is forbidden to directly fund government is fear of inflation. We’ve not had to worry about rising prices for years now. One way to reduce the debt burden, already high but about to explode, would be to allow wages and prices to let rip. Once we do get an economic recovery, I suspect that we might be surprised by the return of inflation.

Europe’s response to the crisis has been mixed. After stumbling badly, the ECB has done the right thing. The right message has been sent: it will do whatever is necessary.

In current circumstances the only policy response is to go large. Don’t obsess about details, giving money to people who don’t need it or companies that would have gone bust anyway. Err on the side of doing too much, accept that much more will be needed. The clean-up can come later.

Elsewhere, Europe has not responded well. The row over “corona bonds” is unfinished business from the financial crisis. The problem is one of framing: if your attitude towards the EU is determined solely by the ability of its members to mutualise their debts, then Europe is in deep trouble. It’s a strange way to judge the worth of the EU.

If Italy or others decide that membership of the EU is not worth the candle, because a corona bond is the only symbol of necessary solidarity, we are in for a rerun of the euro zone crisis.

Europe can show love for Italy and other countries in all sorts of ways, not just by issuing bonds. But corners are being backed into. This all needs sorting out and quickly. Somebody needs to back down.

This all sounds rather gloomy. Is there any scope for optimism?

I think there is, but it’s a harder case to make. We are seeing the deployment of technology in many creative ways: this could have positive effects on innovation and productivity.

More generally, more government involvement in the economy could produce surprising results, particularly if the populist scourge is a casualty of the crisis.

The next president of the US might be New York governor Andrew Cuomo, a step up from either of the obvious alternatives.