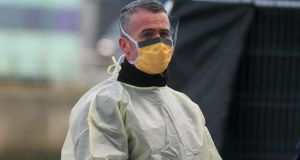 An analysis of just over 4,000 confirmed cases of coronavirus in the State by the Health Protection Surveillance Centre (HPSC) shows the median age of those contracting the virus is 48 years.

The figures released on Saturday indicate that in 1,118 cases (28 per cent) patients had required hospitalisation, and 158 people were admitted to intensive care units.

Some 1,084 Covid-19 cases related to healthcare workers, according to the figures.

There are 206 “clusters” of 838 patients among the 4,014 cases analysed by the HPSC. The breakdown relates to the confirmed cases as of April 2nd.

Where the source of transmission was traceable, community transmission accounted for 62 per cent of cases, close contact for 24 per cent, and overseas travel for 14 per cent.

The analysis was published as it was confirmed on Saturday that the number of deaths from coronavirus has increased by 17, as the number of confirmed cases in the Republic rises to 4,604.

This brings the number of coronavirus patients who have died in the State to 137.

The number of confirmed cases has increased by 331, the National Public Health Emergency Team (NPHET) said in a statement.

The median age of those who have died from the coronavirus, also known as Covid-19, is 81. Some 13 of the 17 patients who died had underlying health conditions.

The deaths included 13 men and four women, with the majority of them located in the east of the country, one in the south, and one in the west.

On Friday, health officials announced there were 424 new cases - the biggest increase in a single day to date, and a further 22 patients had died. It has been more than a month since the first Covid-19 case was confirmed in the Republic.

Dublin still has the highest number of cases at over half (56 per cent) of the national total, followed by 304 cases in Cork, which is eight per cent of the national figure.

“Median age of confirmed cases is 48 years,” the analysis said.

Some 56 people have died from Covid-19 in Northern Ireland, where there are 998 confirmed cases as of Saturday.

In recent days the number of cases globally has surpassed one million, with the total number of deaths over 51,000.

The measures will include twice daily temperature checks and priority testing for staff, and the appointment of Covid-19 managers to oversee nursing homes’ responses to outbreaks.

The spread of the coronavirus within nursing homes was one factor behind the Government’s decision to introduce an effective lockdown, given the potential severity of the disease among elderly patients.

The unprecedented restrictions prohibit people from leaving their homes unless they are shopping for food and essentials, caring for a relative, or exercising within 2km of their home.

There are exemptions on the restrictions for workers deemed to be “essential services” during the public health crisis.

Chief medical officer Dr Tony Holohan said: “The nationwide, collective effort to limit the spread of Covid-19 has been inspiring. We must keep up this effort, continue to protect the vulnerable in our society and ultimately flatten the curve.”