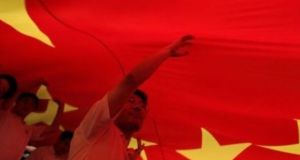 With the exception of Latin America, all regions of the world saw a decline in Chinese activity in 2019

Chinese foreign direct investment into Ireland rose by 56 per cent to $145 million (€130.5 million) last year as FDI in Europe and North America hit its lowest point in almost a decade.

Among the biggest deals announced by Chinese companies locally in 2019 were China Re’s $41 million acquisition of Chaucer, Emeri Nutrition’s opening of a $60 million infant formula facility in Co Meath. In addition, WuXi Biologics, which is building a €325 million plant in Dundalk, said it was doubling down on that investment with plans to build a $240 million vaccine production facility on the new campus.

Law firm Baker McKenzie, which compiled the latest figures, said FDI was likely to grow further this year thanks to a pending pipeline of deals that have been locked in.

“Investment into Ireland increased last year due to both continued M&A [mergers and acquisitions] activity and greenfield projects completing,” according to Peter Lu, partner and head of Baker McKenzie’s China group in London.

“The rise is underpinned by a number of factors – but none more so than good relations. Throughout the year these two nations have continued to build a strong relationship, and now key industries across Ireland are witnessing the benefits as a result.”

The latest data shows that while Chinese FDI to Ireland is on the rise, investment in Europe and North America hit a nine-year low in 2019 to $19 billion. This compares to FDI of $107 billion just two years earlier.

FDI to Europe at $13.4 billion was more than twice that of North America. Chinese investors completed only $5.5 billion in deals in Canada and the US, down from $7.5 billion in 2018, and the lowest annual investment in the region since 2009.

Chinese outbound M&A declined 29 per cent to $57 billion from $80 billion a year on the back of tighter capital controls and geopolitical tensions.

With the exception of Latin America, all regions of the world saw a decline in Chinese activity in 2019.

Baker McKenzie forecast a slow start to 2020 investment given a fairly weak pipeline of just over $10 billion in announced deals for Europe and North America.

1 Opioid executive admits to ‘no morals’ ahead of prison term
2 Farmer seeks to challenge €3.6bn Intel plan in High Court
3 Who are Ireland’s 17 billionaires?
4 Are there annual limits on inheritances or gifts to a child?
5 The Cork butcher’s daughter directing A-list celebrities in Miami
6 Microsoft sued by 'frozen out' ex-worker
7 Financial payments group Planet in rumoured €1.98bn sale
8 A family business that just keeps on growing
9 Fenergo to take on extra 300 staff as it invests €30m in expansion
10 The end of the world could be upon us. Why are we doing nothing?
Real news has value SUBSCRIBE