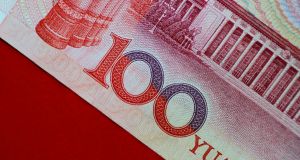 News of the regulator’s investigations hit shares in some of the companies, which are among China’s biggest blue-chips. Photograph: Reuters

Regulators in China have stepped up their scrutiny of bank lending to local firms engaged in large-scale overseas acquisitions, including HNA, which bought Dublin-based aircraft leasing company Avolon in 2015 and is Deutsche Bank’s biggest shareholder.

HNA also owns the airport services firm Swissport and the airline catering company Gate Gourmet, and it has a 25 per cent share in Hilton. Bloomberg estimates that HNA has announced more than $30 billion (€27 billion) of asset purchases since last year.

The conglomerate has also filed a defamation lawsuit in New York against fugitive property tycoon Guo Wengui after a series of allegations of corruption against the company and of inappropriate links to Communist Party leaders and their families.

Anbang Insurance owns New York’s Waldorf Astoria hotel but there has been speculation that its chairman Wu Xiaohui has been detained as part of an investigation into the insurer’s overseas investments, as well as unspecified “economic crimes”.

News of the regulator’s investigations hit shares in some of the companies, which are among China’s biggest blue-chips.

Shares in Fosun fell nearly 10 per cent, while HNA stocks were down around six per cent on Thursday after rumours spread that banks had been ordered to assess their loan exposure to them.

Trading in Wanda Film Holding’s shares was suspended after they fell by nearly 10 per cent, prompting the company to dismiss as “malicious speculation” rumours that some banks were offloading the company’s bonds.

Wang Jianlin, the chairman of Dalian Wanda, is China’s richest man with a fortune estimated at €27.75 billion.

The CBRC has been at the forefront of government efforts to stop capital flight out of China. Last year China’s companies invested over €20 billion overseas, draining foreign currency reserves and putting pressure on the exchange rate of the renminbi.

The government has already introduced tighter capital control measures that have seen deals in the year to date drop 56 per cent compared to a year previously.

There has also been significant activity clamping down on excesses in the financial system ahead of a key Communist Party congress in the autumn, at which President Xi Jinping is expected to reshuffle the top echelons of the ruling elite.

The news came shortly after the announcement that Chinese domestic equities would be listed on MSCI’s global benchmark equity index for the first time. The listing was a big step for China’s bid to lure international funds, but the regulator’s move on Thursday is a reminder that China’s market remains a thorny prospect for international investors with a difficult-to-read regulatory environment.