Central bankers in Davos watched for clues about future 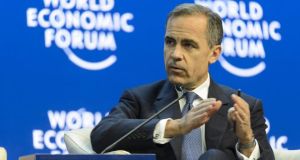 The ECB has done its part – now it’s up for countries to implement structural reforms. That was the message from Benoît Cœuré, a senior ECB figure, on Saturday during one of the closing sessions of this year’s World Economic Forum (WEF) in Davos.

Mr Cœuré was appearing alongside the central bank governors of Britain and Japan in a panel discussion that kept returning to the main topic on everybody’s mind – Thursday’s move by the ECB to launch a quantitative easing programme.

The dramatic events in Frankfurt shaped debate in Davos this year, both in and outside the panel discussions.

While figures such as IMF head Christine Lagarde and the president of the World Bank Jim Yong Kim packed the halls in the swanky Congress Centre in the heart of Davos, the real interest was in the world’s central bankers.

Just days after the IMF downgraded growth forecasts for the global economy and Europe’s economic woes dominated headlines, the words of central banks leaders were closely watched for clues about the future direction of monetary policy and their take on Draghi’s move.

Bank of England governor Mark Carney, who visits Dublin this week, was a high-profile figure at this year’s event. On Friday, he welcomed the steps taken by the ECB as “absolutely necessary to preserve the prospects of medium-term prosperity in Europe. This doesn’t deliver medium-term prosperity, it just creates the conditions for it.”

The following day he gave strong hints that the Bank of England could increase interest rates from their record lows sooner than expected.

“We have a very low inflation environment right now, largely due to oil prices,” he said on Saturday. “We have the responsibility, we have the means and the will to do it and return inflation back to target within the two-year horizon, so people can rely on that.”

The Bank of Japan governor Haruhiko Kuroda struck an optimistic note, predicting 2 per cent growth for Japan in the 2015 fiscal year. He also lightly criticised what he called a mood of pessimism at the WEF. “Some of the pessimism prevailing in Davos this year is a bit exaggerated,” he said, noting that the ECB’s actions, as well as the price of oil, could be good for the world economy.

“By making this big decision, the euro zone could recover strongly and deflation pressure could be eradicated,” he said.

While the US Federal Reserve was not officially represented, IMF chief Christine Lagarde said she expected the Fed to raise rates this year.

“The Fed is probably going to raise rates this year. Our expectation is more likely mid-year than end of 2015,” she told a panel.

Some of the top bankers in the US also chipped in with their views on Janet Yellen’s next move.

Goldman Sachs president Gary Cohn said the Fed’s ability to raise interest rates could be affected by low growth abroad and inflation levels in the US, a comment echoed by Blackstone’s chief executive Stephen Schwarzman who said that the Fed could change its policy “probably slower than people think”.

For many, the opportunity to hear the thoughts of those who run Wall Street is more instructive than any official line, and one of the real allures of Davos.