Bank predicts GDP growth of 3.3% this year on foot of weaker exports 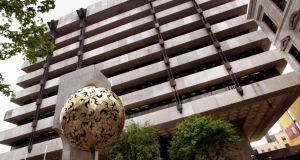 The Central Bank has downgraded its growth forecasts for the economy, and highlighted Brexit as the chief risk to recovery.

In its latest quarterly bulletin the bank said gross domestic product (GDP) was now forecast to expand by 3.3 per cent this year, down 0.3 per cent on its previous projection.This was to reflect the weaker outlook for exports, it said.

However, the bank said the economy continued to grow at a “relatively healthy pace”, with strong employment growth.

Personal consumption expenditure would remain a key driver of growth into the future, it said, predicting per-capita consumption levels would in 2018 surpass pre-crisis levels for the first time.

“The most reliable measures of domestic spending and economic activity suggest that the Irish economy continues to grow at a relatively healthy pace, though there are signs that growth momentum has slowed a little,” the Central Bank’s chief economist Gabriel Fagan said.

“Looking ahead, while the prospects for sustained, solid growth remain positive, external factors, particularly uncertainties in relation to Brexit, pose risks to the outlook.

“To date, in the absence of any weakening in the UK economy, the impact of the Brexit referendum outcome on the Irish economy has mainly been felt through the volatility in the euro/sterling exchange rate.

“Uncertainty in the period following the referendum vote was reflected in a marked weakening of business sentiment indicators, which subsequently rebounded strongly, suggesting a muted overall impact from Brexit-related factors over the second-half of 2016.”