How much did Airbnb hosts in Dublin earn last year? 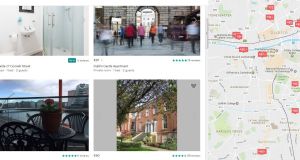 The study shows 23 per cent of guests said they would not have visited or stayed as long in Dublin without Airbnb. 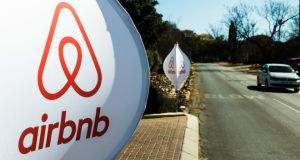 Airbnb users generated an estimated €275 million for Dublin’s economy in 2016, according to a new report from the online accommodation service. Photograph: Waldo Swiegers/Bloomberg

More than 400,000 visitors to Dublin stayed in Airbnb properties last year with individual hosts earning an average income of €4,900 by sharing their homes with strangers.

Airbnb users generated an estimated €275 million for Dublin’s economy, according to a new report from the online accommodation service.

The report, Home-Sharing: the Positive Impacts on Dublin, estimates €221 million was spent on goods and services by people staying in Airbnb accommodation in the capital in 2016, with a further €52 million spent on directly renting homes and rooms.

Some 39 per cent of guest spending is carried out in the neighbourhood in which they stay.

Overall, 6,100 Airbnb hosts welcomed 403,500 visitors to Dublin, with guests staying an average of 3.2 nights and most of them coming for holiday or leisure purposes.

The study shows that 23 per cent of guests say they would not have visited or stayed as long in the city without Airbnb.

As many as 88 per cent of Airbnb hosts in the capital said they shared their primary residence, as against 64 per cent around the Republic. Some 53 per cent of Dublin-based hosts stated they used the income from renting to make ends meet.

Not surprisingly, St Patrick’s Day was a particularly popular time for visitors to Dublin, with almost 5,000 Airbnb guests staying in the city for the event, generating, according to the company, almost €2.4 million for the local economy, a rise of 60 per cent compared with 2015.

According to Airbnb, the Phoenix Park neighbourhood is not only the most popular location for guests visiting Dublin, but is also ranked the 15th fastest-growing globally with a 180 per cent rise in bookings over the last year.

The average age of a typical host in Dublin is 39 years and hosts have lived for an average of 16 years in their neighbourhood. In addition, 53 per cent of hosts are female and 47 per cent are male.

Airbnb hosts typically list their home or rooms for an average of 50 nights a year and more than half said hosting had positively affected their outlook on life, with 43 per cent saying it had led to increased interaction with their community.

A total of 12,000 hosts rented rooms to more than 800,000 people across the Republic in 2016. However, while there are many fans of the short-term accommodation service, it also has plenty of detractors. Some critics claim it has added to the rental crisis in the city, taken valuable income away from hotels and B&Bs and led to a rise in antisocial behaviour in some apartment complexes. There has also been confusion about the tax treatment of income earned by Airbnb hosts.

Aisling Hassell, who heads the company’s Dublin office, said the report was conducted in part to “dispel some myths and reaffirm what the Airbnb community is about”.

“There’s been a lot of misinformation and assumptions made about Airbnb but the study shows the community is generating more than €200 million to the local economy and that’s a great story to tell,” she said.

Ms Hassell said criticism of the service had not affected either the number of hosts or guests using Airbnb in Ireland.

The company was unable to provide figures on how much tax has been paid by Airbnb hosts locally.

Equally, the Revenue Commissioners were unable to give a breakdown but reiterated that the provision of rooms through online accommodation sites such as Airbnb is subject to tax. It urged any hosts who have not declared such income to do so or face possible penalties.

Hosts who have hosted in the past year

Annual earnings for a typical host

Inbound guests to Dublin in the past year

Will remote working become the norm? 05:30
‘Going abroad forced me to challenge assumptions that I had’ 05:28
Tighter regulations for car makers will drive buyers to choose electric 05:21
Goffs expecting sharp slide in horse sales due to Covid-19 05:00
‘Triple jeopardy’ looms for Irish firms, warn institute of directors 04:30