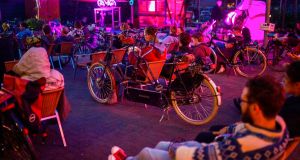 Image of the week: Cycle-in cinema

If cycling isn’t mandatory for all by the end of this pandemic, there are people who will be very disappointed. Still, there’s much to admire in this innovative cycle-in/bike-in cinema in Witten, western Germany, built by local students along social distancing principles. If the film plot flags, or those cane chairs start to feel a bit sore, viewers can cycle off with only a minimal disturbance to their fellow audience members. And if there happens to be a full moon, they can pretend they’re in E.T. the Extra-Terrestrial as they pedal away.

Percentage drop in sunscreen sales in the Irish market in the 12 weeks to July 12th, compared with the same period last year, according to retail analysts Kantar.

Sum for which US singer Taylor Swift is flogging a cable-knit cardigan plus digital album via her online store. The surprise merchandise move is less about staycation weather in Ireland, and more to do with the fact she has a song called Cardigan.

Getting to know: Ivan Ko

Ivan Ko, a Hong Kong property tycoon, is Mr Nextpolis. As reported in the Times, the founder of the Victoria Harbour Group has designs on building an autonomous city in Ireland that would become the 500 sq km home to Hong Kong emigrants fleeing a crackdown on their civil liberties. The city, to be built from scratch, would be named Nextpolis, with the favoured of six identified sites located between Drogheda and Dundalk. “Overall we think Ireland is very good,” Ko (60) told the Guardian. Alas, he has already been given the bad news that such a project could never happen, not least because the Irish government doesn’t actually own a 500 sq km site. Ko, not to be defeated, has come up with a scaled-down proposal, while also exploring his options in other countries.

It is 95 long days to go before the US presidential election, but in the meantime here’s a recap of Twitter’s recent skirmishes with incumbent president Donald Trump.

1. ‘Open dialogue.’ In April 2019, Twitter chief executive Jack Dorsey visited the White House to speak with Trump “protecting the health of the public conversation”. Trump had alleged Twitter did not “treat me well as a Republican” and accused it of limiting his follower numbers.

2. Fact-checking. In May 2020, Twitter fact-checked the president for the first time, labelling two tweets about mail-in election ballots leading to a “rigged” vote “potentially misleading”.

4. Escalation. Trump’s tweet “when the looting starts, the shooting starts” was subject to a public interest notice, with Twitter ruling that the tweet violated its rules on glorifying violence.

5. Like father. This week, Twitter “limited the functionality” Donald Trump jnr’s account for 12 hours and deleted a video containing Covid-19 misinformation that had been posted by the president’s son.