Business activity at a record low in Dublin in second quarter 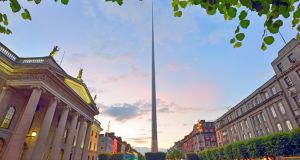 Business activity in Dublin contracted at the most severe rate on record in the second quarter, according to new figures.

The latest Dublin Economic Monitor, which covers a number of key indicators, shows new order levels and employment at companies based in the capital fell at a faster rate than in the rest of the State.

Employment levels were down 33,000 year-on-year, the latest monitor shows, with the IHS Markit purchasing managers’ index (PMI) falling to 25.2.

The declines in output and new orders during the second quarter exceeded those seen during the worst of the global financial crisis.

Services were particularly affected, most likely due to the importance of the sector for economic activity in the Dublin region.

Weak business activity was further reflected in the office market where vacancy rates increased, while public transport usage declined by over 76 per cent as a combination of travel restrictions and remote working reduced movement.

Hotel occupancy rates fell as low as 5.9 per cent, with average daily rates falling by over 40 per cent year-on-year.

1 Google tells workers to return to country where they are employed
2 Sean Quinn stunned at rebranding of Quinn Industrial Holdings
3 Probate is changing: What does that mean for you?
4 Whistleblower warned EY of Wirecard fraud four years before collapse
5 Three Ireland switches on 5G network around the country
6 Will tracker mortgage be at risk if Ulster Bank closes?
7 Visitors to Ireland increased almost 60% last month
8 Google ups bid to clinch approval for $2.1bn Fitbit takeover
9 Landlords accuse New Look fashion group of exaggerating insolvency
10 Subway bread too sweet for zero rating on VAT
Real news has value SUBSCRIBE