More than 780,000 got income assistance from State last month

However, numbers in receipt of State support due to Covid-19 continue to drop 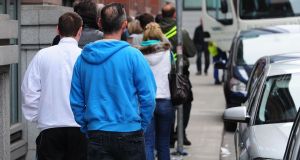 A total of 783,485 persons were on the Live Register, received the PUP, or benefitted from the TWSS.

More than 225,000 people signed on to the live register last month, while hundreds of thousands more depended on State supports due to the Covid-19 pandemic, according to new figures from the Central Statistics Office (CSO).

Overall however, the numbers without work and in receipt of Covid-19 pandemic supports from the State dropped compared to the previous month.

The unadjusted Live Register total for August was 225,844 people. That was an increase of 26,751 compared with the same month last year, but represented a drop from the 244,562 in July.

On an adjusted basis, the number of male and female claimants on the Live Register were 118,900 and 94,800 representing 55.6 per cent and 44.4 per cent of the seasonally adjusted Live Register total respectively. The overall number of 213,700 people was down 12,400 compared to July.

The Live Register is not designed to measure unemployment as it includes part-time workers who work up to three days a week, as well as seasonal and casual workers entitled to Jobseeker’s Benefit or Jobseeker’s Allowance.

Furthermore, those in receipt of the Covid-19 income support payments are not included on the Live Register unless they meet the usual criteria.

However, the statistics show another 224,956 persons were in receipt of the Pandemic Unemployment Payment (PUP) for the last week of August.

A total of 783,485 persons were on the Live Register, received the PUP, or benefitted from the TWSS.