'I want Ireland to be a light unto the world’: Varadkar on Time Magazine cover

While Taoiseach hopes UK will change mind about Brexit, he does not want it punished 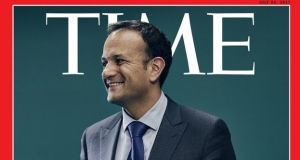 Taoiseach Leo Varadkar has made the cover of the Europe edition of the New York-based magazine, under the headline ‘An island at the centre of the world’.

The United Kingdom should not be punished for quitting the European Union and Ireland will lose “as much as, if not more” than Britain, if that happens, Taoiseach Leo Varadkar has told Time magazine.

The newly-elected Mr Varadkar has made the cover of the Europe edition of the New York-based magazine, under the headline “An island at the centre of the world”.

“I would like Ireland to become what Michael Collins described as the shining light unto the world,” he declared, saying that Ireland will protect its international standing through the European Union and the United Nations.

Saying he would prefer if Brexit it “wasn’t happening”, Mr Varadkar said he hoped the UK would at some point “change its mind”, but emphasised that avoiding Border controls on the island is Ireland’s first priority.

“We are pretty much abolishing tariffs with Japan and Canada and it would be odd if we had tariffs with Britain quite frankly.

“The idea that you could send agricultural products to Tokyo and Osaka and not pay tariffs and you would have to pay tariffs sending them to Manchester is quite hard to fathom in the modern world.”

Mr Varadkar said he is “confident” the European negotiating team understand the “unique issues and problems” faced by Ireland in light of Brexit.

But he admitted turning “positive sentiment into a final agreement that can be written down into international law is going to be very difficult”.

The Taoiseach added the British negotiating team seem to have taken the position of retaining “most of the benefits of membership and disavow most of the costs and responsibilities and that’s not a sustainable position”.

A recent study by the think tank Policy Exchange suggested Ireland should consider an ‘Irexit’ given the high stakes from Brexit for the country but the Taoiseach said it something the government is “not even considering and something we can absolutely rule out”.

“Ireland has taken a different road to the Britain on a number of previous occasions and “made the decision that we are at the heart of Europe. It is the union that we helped to build and even if there are rocky waters or difficult times ahead, that is where we belong”.

Questioned about a united Ireland referendum, which had been raised as a prospect by his predecessor Enda Kenny, Mr Varadkar said he is “very much opposed” to it.

Such a Border poll would, he believes, be defeated but also it would “give rise to further nationalism, further sectarianism and further polarisation”.

In the wide ranging interview, the Taoiseach also discussed relations with US president Donald Trump. He said that his recent call with Mr Trump, who congratulated him on becoming Taoiseach, was not the first time the two had talked.

When the Taoiseach was minister for tourism, Mr Trump called to discuss a planning issue relating to Doonbeg golf course in Co Clare.

“At the time he had a planning issue which we were able to resolve. It was resolved by the county council rather than by me but it was resolved,” said the Taoiseach. He added that he “got the impression he is the kind of person who would just pick up the phone and want to ring the man or woman who is in charge over there, rather than necessarily going through normal business or diplomatic procedures”.

The Taoiseach said he is “determined to keep relations between Ireland and America at a very good level”. However, he added that he will take up issues where he disagrees with him on such as climate change and human rights.

“It is important that when friends are speaking to each other that they are able to be very frank in the views that are exchanged and I certainly will be doing that.”

Asked about the issue of abortion, he reiterated that a referendum on the Eighth Amendment will be held next year. He said that “the Irish people should have their say”.

The question asked in the referendum “would need to be able to be very clear about what the question they are being asked is. So we want to refine that question over the next six months to a year and put it to the people and allow them to make a decision.”