US economist Richard Thaler has been awarded the 2017 Nobel economics prize for his contributions in the field of behavioural economics. Video: The Nobel Prize 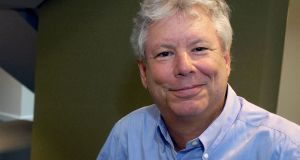 US economist Richard Thaler won the 2017 Nobel Economics Prize for his contributions in the field of behavioural economics, showing how human traits affect supposedly rational markets, the Royal Swedish Academy of Sciences said on Monday.

Thaler brought to prominence the idea of “nudge” economics, where humans are subtly guided toward beneficial behaviours without heavy-handed compulsion, the theme of a 2008 book he co-wrote which caught the eye of policymakers around the world. In his award citation, the Academy said his research had harnessed psychologically realistic assumptions in analyses of economic decision-making, exploring the consequences of limited rationality, social preferences, and lack of self-control.

“In total, Richard Thaler’s contributions have built a bridge between the economic and psychological analyses of individual decision-making,” the award-giving body said on announcing the 9 million Swedish krona (€943,000) prize. “His empirical findings and theoretical insights have been instrumental in creating the new and rapidly expanding field of behavioural economics, which has had a profound impact on many areas of economic research and policy.”

The economics prize, officially called the Sveriges Riksbank Prize in Economic Sciences in Memory of Alfred Nobel, was established in 1968. It was not part of the original group of awards set out in dynamite tycoon Nobel’s 1895 will.

Economy is the last of this year’s Nobels. The prizes for physiology or medicine, physics, chemistry, literature and peace were all awarded last week. The United States has dominated the economics prize, with American economists accounting for roughly half of laureates since the inception of the award. Indeed, between 2000 and 2013, US academics won or shared the prize every year. While few economists are household names, past winners have included Milton Friedman in 1976, whose work is a cornerstone of current monetary policy, and James Tobin in 1981, who proposed countries should tax financial transactions. Some countries in the European Union agreed on such a tax to help fight the debt crisis, but implementation has been delayed, among other things by Britain’s decision to leave the bloc.