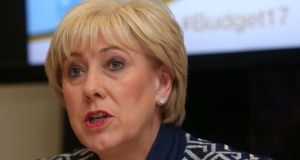 There is “huge disappointment” across the arts sector at its 2018 budget allocation, the chair of the Arts Council has said.

Sheila Pratschke said the council’s funding of €68m for next year – an increase of €3 million from 2017 - would allow it to meet existing commitments but would severely hamper efforts to broaden support to artists and organisations nationwide.

The increase of less than 5 per cent compares with an 8 per cent increase last year following several years of cuts.

“While this will be a very difficult year for us and those we fund, we trust that the Taoiseach and Government will stand over the promise to double funding to the arts and culture sector by 2024,” said Ms Pratschke in reference to a promise made in May by Mr Varadkar.

The National Campaign for the Arts also expressed deep disappointment at what it described as minimal increases.

“This is despite the Government greatly raising expectations in the last year through its high-level initiative, Creative Ireland, whose stated aim is to raise the priority of arts, culture and creativity across Government, and the Taoiseach’s campaign pledge to double investment in the sector,” it said in a statement, which made an unflattering comparison between Mr Varadkar and Canadian prime minister Justin Trudeau.

“(Mr) Trudeau actually delivered on his pledge in his first budget last year, setting out a concrete five-year programme of increases,” it said. “The NCFA therefore calls on the Taoiseach as a matter of urgency to set out a concrete and credible path to delivering his pledge and to clarify if this commitment still exists.”

In his budget speech, Minister for Finance Paschal Donohoe announced an additional €13m - €9 million in current and €4 million in capital spending – for Department of Culture, Heritage and the Gaeltacht .

Minister for Culture Heather Humphreys has allocated €8.5 million of that sum to arts and culture, including an additional €1.5 million for the Irish Film Board – a 9 per cent rise.

There were also increases for Culture Ireland, which promotes Irish culture overseas, and for targeted initiatives by local authorities and in education. Irish Film Board chair, Dr Annie Doona welcomed the news. “We look forward to being in a strong position next year to increase our support for the development and production of Irish films and animation. screen industries,” she said.

Ms Humphreys also announced, separate from the 2018 funding, that there would be additional capital funding of €90 million for culture, heritage and the Gaeltacht for the period between 2018 and 2021.

“This represents an increase of almost 50 per cent in my department’s capital budget over that period, and will, for the first time, allow for incremental planning on a multi-annual basis, to benefit our national cultural institutions and regional arts infrastructure, in particular,” she said.