NTMA could raise €4bn in sale of 10-year bonds 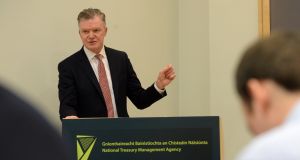 The State’s debt management agency is expected to market 10-year bonds from as early as Wednesday which could raise up to €4 billion, The Irish Times has learned.

The National Treasury Management Agency (NTMA) has mandated Barclays, BNP Paribas, Danske Bank, Davy, Natwest Markets and Nomura as joint lead managers for a forthcoming 10-year bond which would mature on October 18th, 2030, it said in a statement.

The Irish Times understands that the agency will begin to market the transaction on Tuesday with a view to raising about €4 billion.

The NTMA did not confirm that, saying the transaction was expected to be launched and priced in the “near future subject to market conditions”.

“While we had scheduled a bond auction for this week, we have decided to proceed with a larger syndicated transaction instead,” said NTMA director of funding and debt management, Frank O’Connor.

“This decision is based on current market conditions and investor feedback, which suggested that demand is likely to be greater than can be typically accommodated by an auction.”

1 Aldi to impose limits as Christmas toys go on sale
2 Fair deal? Family at odds with hospital and each other not so sure
3 Monsoon landlords win challenge over creditors arrangement that cut rents
4 First look: Is the iPhone 12 Pro the best smartphone out there?
5 What to consider if older person or loved one needs care at home
6 ‘I hate haggling because I hate when people do it to me’
7 Irish elearning company LearnUpon closes €47.4 million investment
8 Leslie Buckley’s criticism of inspectors ‘built on thin air’
9 Ryanair lags rivals as Covid-19 vaccine hopes buoy markets
10 Irish house prices could buck European trend and fall this year, says S&P
Real news has value SUBSCRIBE