The economic storm clouds are gathering, and boy, are they dark 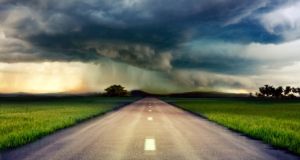 Gathering storm clouds are the obvious metaphor. Rarely have so many economic negatives been gathering so visibly – they more often arrive out of a clear blue sky. Any one of those clouds could change direction – or all could come our way. If they all arrive at the same time it’s going to be quite a ride. We will look back on the last few years of rapid growth and plentiful jobs with wistful nostalgia.

In no particular order of importance, the list of usual suspects includes US president Donald Trump’s trade wars, Brexit, monetary policy impotence, fiscal policy mistakes and climate change. I apologise if this list has left anything out – it’s already a long and scary set of risks.

Trump has upped the trade war ante in a big way over the past few days. That war is now around 18 months old. So far it has taken a bite out of growth but has not prompted a global recession.

Trump has now explicitly ordered US companies to leave China and ratcheted up the scope and size of his tariffs. That he has no authority to insist companies stop doing business with China is almost beside the point.

That a sitting US president can issue such an order with barely a peep of protest from the supposedly pro-business Republican Party speaks volumes about how the previously unimaginable is now the new normal.

The Chinese will, sooner or later, feel compelled to respond in kind, just as they have with each new Trump tariff. If anything, their responses so far have been more measured than the provocations they have faced. But respond they will.

I suspect, among other things, they will accelerate their pivot away from doing business with the US, at least for as long as Trump is president. That will come with an economic price for China that they will in all likelihood be willing to pay.

All of this will have consequences for the rest of us. The German economy, one of the most open in the world, is shrinking. So, on latest data, is the UK, another country very exposed to world trade. We should be ready for slower growth coming our way.

What is the right policy response? Trump describes his Federal Reserve chief, Jerome Powell, as a bigger enemy than the leader of China. Powell states quite clearly that while he has already cut interest rates – and is prepared to do so again – there isn’t much he can do to mitigate the growth hit from Trump’s trade war. Powell, of course, is quite right.

Larry Summers, Harvard professor and ex US Treasury boss, this week restated his “secular stagnation” thesis: unless economic policy dramatically changes, we are in for a prolonged slump. Summers thinks this is likely even without a trade war. Part of the problem is with monetary policy.

Summers points out that we used to think central banks could create as much inflation as they liked. The experience of the past 10 years, argues Summers, is that this is clearly not true. My own view is that central bankers just haven’t been trying hard enough. Either way, we clearly have a problem: robust growth has not been restored via the usual channel of interest rates cuts. What happens if we now have a Trump-inspired global recession?

Summers’ answer is that the time has come to use fiscal policy. This is surely correct, particularly in Europe, especially in Germany where the scope for fiscal expansion is as obvious as it is large.

It won’t happen because German economic orthodoxy is bitterly opposed to the ideas that Summers espouses. Paradoxically, Germany will be okay with Ireland fighting a Brexit- (or Trump-) inspired recession with more government borrowing. Just don’t ask Germans to do anything similar.

All of this is bad enough without the impending hard Brexit on October 31st. One of the culturally distinguishing features of a certain type of Oxbridge-educated public schoolboy is the need not to show effort.

At school, opprobrium is heaped on hard working “swots”; other cultures give the intelligent grafters prizes and countries to run. As adults, our certain type of English elite is driven by the need not to appear “a bore”.

Hard work, effort and attention to detail lead to certain social death. When UK prime minister Boris Johnson talks about the “hard work” necessary over the next few weeks he isn’t talking about his own plans. Pity the poor civil servants, the swots. And don’t tell your children that honesty, diligence and talent bring their own reward.

I fear that German chancellor Angela Merkel is now playing with Johnson, albeit very politely. And Europe is now reconciled to a hard Brexit. That’s not the same thing as being “ready”. That is impossible.

All of this might be less scary than it looks. Trump may realise that there is an election next year. Brexit could turn out to be benign. Global growth might spontaneously resume. The planet could suddenly start cooling. I’m on record as being optimistic about the outlook. That perspective is getting much harder to sustain.