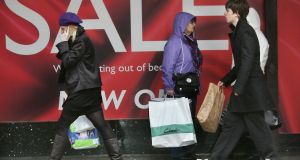 VAT generated a near record €2.7 billion and accounted for nearly half of the total amount of tax collected in January, which was €5.9 billion.

Strong returns from income tax and VAT saw the State’s tax take increase by 10 per cent in January, compared with the same period last year.

This represents a year-on-year improvement of 17 per cent or €315 million, reflecting the current strength of the Irish labour market, which has driven unemployment to a 13-year low of 4.8 per cent. However, the department said that some of the increase was down to a “timing issue”.

“The very high income tax year-on-year growth is largely because of employers making payments at different times in December and January last year compared to December 2019/January 2020,” a spokesman said.

VAT generated €2.7 billion and while this accounted for nearly half of the total amount of tax collected in January (€5.9 billion) it was marginally down on last year.

January is the biggest month of the year for the sales tax as it reflects the busy November-December shopping period, which includes online sales events such as Black Friday and Cyber Monday and the more traditional post-Christmas sales.

Corporation tax, which hit a record €11 billion last year, came in at €218 million for the month, which represents a 214 per cent increase on January last year.

However, the department cautioned that January 2019 yielded a “net negative total” due to several high-profile repayments.

While monthly tax returns fluctuate, the latest figures left the exchequer with a surplus €1.66 billion in January compared to a surplus of €1.64 billion for the same month last year.

The €23 million year-on-year improvement is driven by an increase in tax revenues, and somewhat offset by increases in both current and capital voted expenditure, the department said.

Total voted expenditure in January was just under €4.6 billion, which represented an 8.5 per cent or €360 million increase in year-on-year terms.

“January is the second most important month for tax receipts and the biggest month of the year for VAT,” tax partner with Grant Thornton Ireland Peter Vale said.

“VAT receipts in January reflect trading activity over the Christmas period. Perhaps surprisingly, the figures for the month were 1 per cent below the 2019 comparative,” he said.

“ It looks like lingering Brexit uncertainty fed into consumer confidence over the Christmas period and depressed spending,” he said.

“ A lingering concern will be disappointing VAT figures, although the excess in income tax receipts more than makes up for this,” he said.

Mr Vale said there was likely to be a lot of focus on corporation tax again this year, with May the first key month. The Department of Finance said it expects corporation tax receipts to hold up this year, but to drop from next year.

Corporation tax receipts have more than doubled since 2014, but nearly 50 per cent of the total comes from just 10 firms, understood to include tech giants Apple, Microsoft, Dell, Google and Oracle.

As a result the Government has been warned not to use the excess revenue to fund permanent spending measures.