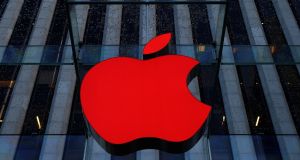 In its appeal against the European Commission’s ruling that it owes the Republic €13 billion in taxes, Apple said its Irish branches carried out only “routine functions” and were not involved in the company’s profit-driving activities. Photograph: Brendan McDermid/Reuters

Apple has alleged that the European Commission made “fundamental errors” as it ruled last year that the iPhone maker owed the Republic €13 billion in unpaid taxes, plus interest.

The US technology giant, which appealed the commission’s decision on December 19th, has relied on 14 pleas in law to support its action, according to an outline of its application, published in the Official Journal of the European Union on Monday.

The commission contends that the Revenue Commissioners gave Apple an unfair and selective advantage in “rulings” in 1991 and 2007 by allowing the company channel most of its European income through “head office” divisions of two subsidiaries in Ireland, which were non-resident for tax purposes.

However, Apple and the Government, which has also appealed Brussels’ decision, argue that because Apple’s products and services are created, designed and engineered in the US, the bulk of the profits of the units are due on the other side of the Atlantic.

Apple said that the commission “failed to recognise that the Irish branches carried out only routine functions and were not involved in the development and commercialisation of Apple IP, which drove profits”.

The Californian group also claims that the commission failed to conduct a diligent and impartial investigation, while it “exceeded its competence” under the Treaty on the Functioning of the European Union by “attempting to redesign Ireland’s corporate tax system”.

“Our recent decisions on illegal state aid, in the form of special tax treatment, are based on principles that have been part of the law for many years,” Ms Vestager told the committee. “Those principles are essential to make the single market work for all countries, big or small.”

The appeals by Apple and the Government have been made to the EU’s General Court, which may take more than two years to complete. Most commentators see the case ultimately ending up before the European Court of Justice.