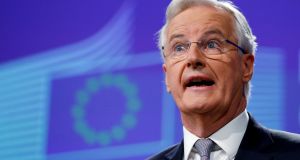 Michel Barnier: the Frenchman is leading the Brexit talks on behalf of the EU. Photograph: François Lenoir/Reuters

This is not shaping up well. The British government has let it be known that it hoped it could commence negotiations on a new trade deal with the EU at the same time as it was negotiating its exit. This always looked unlikely, and a report in the Financial Times on Monday underlined the opposition elsewhere in the EU to this. Europe wants to deal with the divorce terms first before moving on to what life will be like post-Brexit.

This carries two warning signs for Ireland. The first is the increased risk that Brexit could turn into a series of rows. This makes a “harder” Brexit more likely – and that is bad news for Ireland.

The second, and connected, issue is that it now looks next to impossible that Britain will have concluded a deal on new trading arrangements before it leaves the EU. Trade experts have warned all along that negotiating a post-Brexit deal will take some years , and even the British government now seems to accept that some kind of phasing in of new arrangements will be needed.

The trouble is that, in an acrimonious atmosphere, the risk is of Britain leaving the EU with no transitional arrangements in place for what happens between then and the point at which a new trade deal is negotiated. This would pose particularly problems for Britain, but also for Ireland, with the likelihood of tariffs and the certainty that customs controls would be needed.

While Ireland stands to be one of the countries most affected by the British decision to leave Europe, we will be supporting the British case for advancing trade talks as quickly as possible. It is very much in Ireland’s interest for progress to be made on a trade deal and for this to allow some kind of transitional arrangement when Britain does leave the EU.

Yet Michel Barnier, the Frenchman leading the talks on behalf of the EU, has told the other member states that his plan is to make progress on Britain’s potential £60 billion exit bill and on the rights of EU citizens living in Britain during the first months of the talks. It is hard to see this moving quickly, and easy to see how it could turn quickly into a series of rows and stand-offs.