Planet Business: The toys are back in town 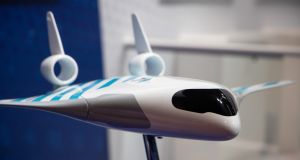 But where are the windows? A model of Airbus’s Maveric aircraft. Photograph: Seong Joon Cho/Bloomberg

Image of the week: Blended wing and a prayer

“Imagine travelling in this blended-wing body aircraft,” mused Airbus about its vision of the future, on display this week at the Singapore Air Show. Such aircraft, if they are ever engineered for real, could generate up to 20 per cent in fuel savings while also boasting an “exceptionally spacious” cabin layout, the manufacturer says.

Since last year, Airbus has been carrying out flight tests on a small-scale, remote-controlled technology demonstrator worryingly code-named Maveric at a secret location in France, having been prompted to revisit the old concept of the “blended-wing body” by climate concerns.

Airbus executive vice-president of engineering Jean-Brice Dumont believes it is “high time” to push the technology further, though one question that hasn’t been answered yet is whether the “giant flying wings” of Airbus’s imagination will have windows or use video screens to mimic the effect of windows for passengers who prefer to be aware that they are tens of thousands of feet in the air.

In numbers: Toys on the side

$1.43 billion Quarterly revenue recorded by toymaker Hasbro in the final three months of 2019 as sales of toys linked to Frozen 2 and Star Wars offset the impact of Donald Trump’s trade war with China.

$4 billion Cash sum that Hasbro recently spent buying UK company Entertainment One, giving it control of cartoon superheroes PJ Masks and the one and only Peppa Pig.

3 Number of factories that Hasbro rival Mattel is closing in a bid to stabilise its business, which may or may not be lifted by a forthcoming live-action Barbie film from Greta Gerwig.

Getting to know: Taika Waititi

Film fans will know Taika Waititi as the guy from New Zealand who’s just won the adapted screenplay Oscar for dark satire Jojo Rabbit, which he also directed and starred in as Hitler. Waititi-awareness this week spiked among another cohort, however: anyone who has ever struggled with an Apple keyboard. Asked at his post-Oscars press conference what “needs” he thought the Writers Guild of America (WGA) should bring to the table in its next round of talks with producers, he side-stepped the question.

“Apple needs to fix those keyboards,” he answered. “They are impossible to write on, they’ve got worse. It makes me want to go back to PCs,” the entirely deadpan lament continued. Met with confused silence, he expanded on his theme, dubbing the keyboards “horrendous” and concluding that “the WGA needs to step in and actually do something”. Eventually, he triggered a mild splutter of laughter, went viral and sparked a flurry of Apple headlines, including this one from Gizmodo: “How bad is Apple’s keyboard problem? Even Hollywood recognises it.”

Amazon founder and would-be king of commercial space travel Jeff Bezos has been active in the property market on earth lately - or “mansion shopping” as the New York Post put it. Here are some of the humble abodes the world’s richest man has added to his cart over the years.

1. The Warner estate. The latest addition to the Bezos portfolio is a Beverly Hills mansion named after Jack Warner, the Warner Bros mogul who built it in 1937. It cost the Amazon boss a record-breaking $165 million to buy the nine-acre estate off magnate David Geffen, but then it does have a tennis court.

2. World of possibility. For some $90 million in loose change, he’s also snapped up an undeveloped tract of land in Los Angeles from the estate of late Microsoft co-founder Paul Allen.

4. Washington DC powerhouse. The former Textile Museum in the Kalorama part of the city cost the Washington Post owner a mere $23 million in 2016 and it has been undergoing renovations ever since.