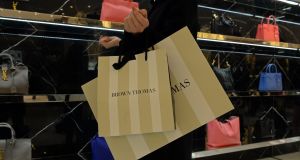 Brown Thomas has agreed to take over two floors of the House of Fraser department store in the Dundrum Town Centre. The new Brown Thomas store, which will be roughly half the size of its flagship outlet on Grafton Street, will employ more than 400 staff when it opens early next year. Ciarán Hancock has the details.

A claim in a Ryanair advertisement that it is “Europe’s . . . lowest emissions airline” was found to be misleading by the UK’s advertising regulator. Peter Hamilton reports.

Strong gains in income tax and VAT saw the State’s tax take increase by 10 per cent in January, writes Eoin Burke-Kennedy. The news comes as figures show the growth in business activity in the services sector quickened for the third straight month.

On the election front, business lobby group IBEC has warned that proposals contained in some party manifestos would threaten growth and job creation. Cliff Taylor reports.

With housing a hot election issue, Ciaran Hancock outlines why developers are opting to sell their schemes as a job lot to a single investor and how some proposed restrictions on foreign investment in housing would come at high cost.

The cost of the tracker-mortgage scandal has now topped €1.5 billion for the State’s banks after AIB revealed it has been forced to double the money it has set aside to deal with the issue. Joe Brennan analyses what it means for the bank and its major shareholders, including the Irish State.

Finally, among several big commercial property stories by Ronald Quinlan today, he reports on plans for a 29-storey apartment building at Parkgate Street in Dublin that would be the largest residential tower in the city.

1 Coronavirus: New government could face €11bn of austerity
2 Stocktake: History says this is not a bear market rally
3 HSBC board rethinks overhaul and seeks even deeper cuts
4 Working from home: New costs, new stresses and little relief
5 Joint accounts: if one of us dies, can the other access the money?
6 Covid-19 has turned the volume up on musicians’ cut from streaming
7 North Dublin lands with residential potential on sale for €450,000
8 We are ‘sale agreed’, but can we go back with a lower offer?
9 Fierce debate brews as EU Commission lays out recovery plans
10 Government ‘missed opportunity’ not saving company tax windfalls, Ifac says
Real news has value SUBSCRIBE