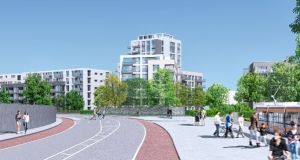 An Bord Pleanála has granted planning permission to Michael Cotter’s Park Developments for a €125 million apartment block development in Leopardstown in south Dublin.

The appeals board has given the “fast-track” plan the green light despite the UK Foreign Office expressing security concerns over the impact a 13-storey “landmark” apartment block in the 249-unit proposal will have on the British ambassador’s residence at Glencairn House.

The submission by the UK Foreign, Commonwealth and Development Office raised concerns in relation to the 13 storeys and the security of the residence of the British ambassador at Glencairn House.

The Foreign Office required assurances from a security perspective that the development would not provide for sightlines into Glencairn and the wider grounds if these exist from the 13-storey tower block.

However, the board gave the plan, comprising three apartment blocks, the go-ahead after its inspector, Una O’Neill, found the apartment blocks would not affect Glencairn House given the impact from permitted development proximate to that house.

Along with the concerns raised by the UK Foreign Office, there was strong local opposition against the Murphystown Way plan, which is bounded by the M50 to the north and the Luas Green line to the east, with more than 100 locals lodging objections.

In their submission, the objectors claimed the landmark 13-storey apartment block was excessive in height and would set an undesirable precedent.

The objectors also claimed the density of the development was excessive and would have a negative visual impact.

Others stated that the noise, dust and disturbance from the construction would cause undue stress for existing residents who were experiencing construction for the past six to seven years.

As part of the proposal, Park Developments plans to sell 24 units from the development for an indicative €10.15 million cost to Dún Laoghaire Rathdown County Council for social housing.

According to the inspectors’ report, local councillors believe the developer’s Part V costs are too high. With planning now granted, the developer will enter formal negotiations with the council on the price.

Councillors opposed the plan but council planners recommended that planning permission be granted.

In her report, Ms O’Neill found the contemporary design of the development to be of high quality which would contribute to the public realm at the location.

The appeals board granted planning permission taking account of the availability in the area of social, community and transport infrastructure.

The board also granted planning concerning the nature, scale and design of the proposed development.