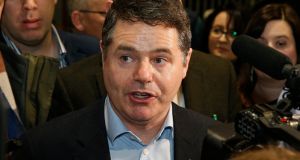 Ireland was better able to get the quantities of Covid-19 vaccine doses needed for its population through the European Commission than if it negotiated independently, Minister for Finance Paschal Donohoe has said.

“I think the commission have done a very good job in very challenging circumstances to secure as much vaccine as possible for member states within the European Union, ” Mr Donohoe said on Monday after a meeting of the Eurogroup club of finance ministers of which he is president.

“In particular for a country like Ireland, the role of the commission has been hugely important because we were better able to secure the quantities of vaccines that is important for the health of Ireland if our efforts are represented by the European Commission,” he said.

The 27 European Union member states jointly negotiated with pharmaceutical companies to secure early doses of the Covid-19 vaccines as they were in development by Pfizer-BioNTech, Moderna and others.

Overall, the bloc has pre-booked more than two billion doses of vaccines that are in different stages of development, which will be allocated to member states in proportion to their population size.

Supplies of the Pfizer vaccine have been temporarily slowed because the company is expanding its main factory in Belgium to be able to produce two billion doses in 2021 instead of 1.3 billion.

This is expected to temporarily affect the countries supplied by the Belgian factory, including the United Kingdom, the EU, Canada and Norway, for up to three weeks before deliveries accelerate.

Asked about proposals from Greek prime minister Kyriakos Mitsotakis that the EU should create a vaccination certificate that could be used to ease travel between member states, Mr Donohoe said it was a matter for the Department of Health.

He noted that Ireland had introduced a requirement for arrivals to produce a certificate showing they had tested negative for Covid-19 in the previous 72 hours, and said any further measures would be “considered” along with other EU countries.

Member states including Spain, Belgium, Iceland, Estonia and Denmark have expressed interest in making it easier for travellers who can prove they have been vaccinated to travel internationally, but the idea faces opposition, including from France.

The meeting of finance ministers was dedicated to discussing the economic impact of Covid-19 and the EU’s Recovery and Resilience Facility, an economic stimulus fund of €673 billion.

Ireland is set to receive €853 million, with €70 million more expected in 2023, in funding earmarked for green and digitalisation projects aimed to modernise the economy and promote economic growth.

The EU finance ministers were joined on their call by Prof Larry Summers, a former United States treasury secretary and an adviser to president-elect Joe Biden.

Wednesday’s inauguration of Mr Biden is seen both in the EU and the US as an opportunity to “relaunch and renew” the transatlantic relationship after some “difficult years”, economy commissioner Paolo Gentiloni said.