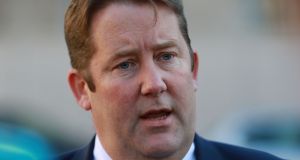 Minister for Housing Darragh O’Brien has said he wants to make home ownership a cornerstone of Government policy on housing.

“Home ownership is not something that should fall down the list ... It’s good for people, it’s good for our country,” Mr O’Brien said, noting that Ireland was now behind the EU average in home ownership.

“You have a whole generation of people who are seeing the dream of home ownership slipping away: that’s why I as Minister am putting in place measures to help people purchase,” he told a webinar event hosted by the Dublin Economics Workshop and Goodbody Stockbrokers.

The event was looking Government proposals to establish a housing commission.

The commission pledges to examine issues such as tenure, standards, sustainability and quality-of-life issues in the provision of housing in Ireland, and to look at lessons Ireland can learn from abroad.

Mr O’Brien said he was at an advanced stage of setting up the commission’s proposed terms of reference but said there was not “a one-size-fits-all approach”.

“We need to ensure we know exactly what we want from a housing commission in Ireland,” he said. The potential benefits of establishing an advisory commission are agreed “but will only be successful if we establish the right commission for Ireland”, he said.

Mr O’Brien said he did not want the commission to end up duplicating work already being done or to become a silo for delaying policy measures. It would have to make “implementable suggestions” and would have a role in looking at other policies and legislative proposals “and stress-test some of those proposals that come forward”.

Mr O’Brien said one of the key issues was supply. According to a new report from the Economic and Social Research Institute (ESRI), the State needs to build 28,000 new homes every year for the next two decades just to keep pace with population growth.

This is significantly ahead of the current level of supply, which is expected to be about 20,000 in 2020.

Speaking at the same event, Liam Bailey, the global head of research for estate agents Knight Frank, said activity in the Irish property market had increased in the wake of Covid-19 and Brexit, with people fast-tracking decisions on where they wanted to live.

One significant trend in the market here has been the return of expats from London and other places, he said. This had led to a pick-up in the purchase of homes in the €1 million-plus category.

Previously expats made up about 5-7 per cent of this market but that had jumped to 25 per cent in recent months, he said.