Almost 23 million US jobs wiped out in a single month 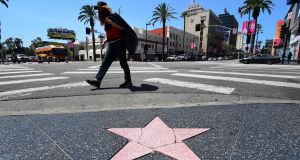 A pedestrian walks past an unnamed and cracked Hollywood Star along a quieter than normal Hollywood Boulevard. Photograph: Getty Images

Almost 23 million US jobs were created in the last decade. In a single month, they were all but wiped out.

The US labour department’s April employment report will further detail the swift and extensive toll of government efforts to mitigate the coronavirus pandemic. The median forecast in a Bloomberg survey of economists calls for an eye-popping 21 million plunge in payrolls, the most in records back to 1939. That’s about 10 times the previous record decline in September 1945, when the nation demobilized with the end of World War II.

The US unemployment rate is projected to surge to more than 16 per cent, the highest in monthly data back to 1948.

The April jobs report will provide a fuller picture of the labour market impact after nationwide shutdowns aimed at limited the spread of the coronavirus. In March, employment slumped by 701,000 and the jobless rate climbed to 4.4 per cent, the highest since August 2017. It was just in February that the unemployment rate matched the lowest level since 1969.

Meanwhile, weekly jobless claims data have been abysmal. In the six weeks ended April 25, more than 30 million Americans have applied for unemployment benefits.

In the UK, with the government trying to figure out how to ease the lockdown, the Bank of England will decide whether the emergency measures it has taken so far are enough for the time being to sustain the economy. In a rare move reflecting the magnitude of the crisis, officials will release their monetary policy and financial stability reports on the same day, giving insight into their outlook for the economic and assessments of the state of the banking system.

The European Central Bank faces a legal hurdle on Tuesday when Germany’s constitutional court publishes its verdict on whether the ECB’s QE program is compatible with the country’s law. An adverse ruling, or one which imposes strict limits on purchases, could spark turmoil in markets, potentially undermining the institution’s fight to help the economy weather the coronavirus pandemic.

The European Commission will be the latest institution to give its official view of the virus impact on the bloc’s economy. The forecasts for individual countries matter because they will form part of the basis on which aid will be granted to different EU states to support their recovery.

Hungary’s central bank will make its first government purchases as part of its QE program on Tuesday, while two days later, Czech policy makers are expected to lower interest rates again. Policy makers in Norway also set rates on Thursday, while Russia’s central bank governor gives a briefing on Friday, amid one of the world’s fastest-growing virus outbreaks and surveys suggesting that the

The Reserve Bank of Australia meets on Tuesday, finding itself in the eye of the storm as a relative lull grips the economy with markets becalmed by its yield curve control. Malaysia’s central bank meets that same day and is likely to cut interest rates, according to early economist survey results.

First quarter GDP reports from Hong Kong, Indonesia and the Philippines will be released throughout the week, while China trade data for April on Thursday will show how the global virus shutdowns dented shipments even as the world’s second-largest economy shows signs of recovery.

Just one of Latin America’s three central banks meeting this week still has policy room available for monetary stimulus. On Wednesday, Brazil’s central bank will probably cut its key rate for a seventh straight time to at least 3.25 per cent. Further easing is expected given 2020 forecasts for below-target inflation and the deepest recession in decades.

By contrast, Chile’s central bank, also meeting Wednesday, has said its key rate, now at 0.5 per cent, has reached its “technical minimum,” or effective lower bound, after two reductions in March. Peru’s policy makers on Thursday are in a similar bind: Their 100 basis-point cut at an unscheduled April 9th meeting left their key rate at a record-low 0.25 per cent. – Bloomberg

1 My aunt never told us that Gran passed away with no will
2 Green Party TD queries ‘usefulness’ of another appeal in €13bn Apple tax case
3 If it’s safe to do so, could this be the time to spend for Ireland?
4 Brussels plans attack on low-tax member states
5 Government to push through €2bn credit guarantee scheme next week
6 The $6bn judgment pitting Nigeria against Irish businessmen
7 State’s €2bn loan scheme, Harvey Norman goes west, and Apple tax case
8 Covid anxiety among domestic holidaymakers could sink this summer
9 Owners of Cork shopping centre sue for €30m after car causes fire
10 Will Revenue come calling with tax bill if inheritance tax threshold falls?
Real news has value SUBSCRIBE