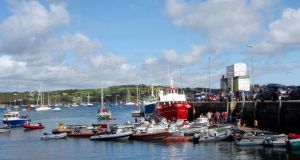 Horse Island, off Schull in west Cork, was extensively upgraded by the Fitzgibbons since they bought it at the height of the Celtic Tiger in 2007. It has its own pier and helipad

A Dublin-based former banker and his wife have sold the 157-acre Horse Island, off the coast of west Cork, to a wealthy European buyer for “more than €5.5 million”.

The island was sold by Adrian and Deborah Fitzgibbon, who owned the island via an Irish company, Roaring Water Farm & Enterprises. Mr Fitzgibbon was a banker at the now-defunct German institution Sachsen, before becoming a partner in an asset management business.

According to its last filed set of accounts, Roaring Water was funded through an offshore Cyprus company, and it is 75 per cent owned by Ms Fitzgibbon, with one quarter owned by Mr Fitzgibbon.

Agents acting for the buyer described their client as an “ultra-high net worth” European, who wishes to remain anonymous. Horse Island has been for sale since 2018, when it was put on the market by the Fitzgibbons for €6.75 million, before the price subsequently dropped to €5.5 million.

Montague Estates, a London-based agency, was retained by the buyer to find a “suitable island” last December, before settling on the Irish property off the coast of Schull.

Montague said negotiations were conducted during the coronavirus lockdown over WhatsApp, which was made all the more difficult because of a “stumbling block” – the buyer “does not speak English”.

Horse Island was extensively upgraded by the Fitzgibbons since they bought it at the height of the Celtic Tiger in 2007. It has its own pier and helipad.

It also comes with seven properties on the land, including a six-bedroomed main house with a guest wing, and six further guest cottages – a pair each of three-bedroom, two-bedroom and one-bedroom properties.

It also includes a games and gym house, tennis courts, saunas and a “shipwreck play house”. The last permanent inhabitants of the island left it in 1965. It was later owned by a German investor.

Mr and Ms Fitzgibbon had previously planned a whiskey distillery for Horse Island, but were refused planning permission. Roaring Water’s most recently filed accounts, for 2018, suggest they were sitting on major losses on their investment at that time.

Horse Island was valued in Roaring Water’s accounts at the end of 2018 at about €6.5 million, so a writedown in its accounts may be required after the sale for about €5.5 million. Roaring Water had a balance sheet deficit of €2.1 million in 2018, and the couple were owed €3.7 million by the company.

Horse Island, which has its own electricity, water and sewage systems, was home to a thriving copper industry between 1820 and 1874. In 1841, the population of the island peaked at 137 people, most of whom were employed in the mines. Some of the ruins of the old village and managers’ houses can still be found on the island.

“Horse Island is a unique trophy asset; sourcing the land off-market and getting the sale over the line during Covid-19 has been a challenge, so naturally we are delighted with this result,” said Thomas Balashev, founder and chief executive of Montague Real Estate.