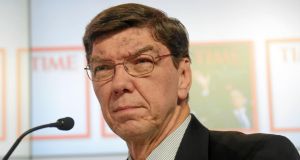 Clayton Christensen: Harvard professor was on the receiving end of a scathing attack

Economics, literary criticism, political science, anthropology – just some of the academic fields that have given us high-profile intellectual disputes, with celebrated thinkers engaging in a form of scholarly pugilism. The field of business theory, however, has never really had the same sort of public spat – until last month, when Harvard history professor Jill Lepore took to the pages of The New Yorker to deliver a scathing attack on Harvard business professor Clayton Christensen, probably the world’s foremost business theorist and the man who invented the concept of disruptive innovation in his landmark 1997 book The Innovator’s Dilemma and subsequent publications.

As Christensen described it, disruption is the process by which an incumbent can be successfully challenged by a smaller rival, often by exploiting new technologies that allow for cheaper, more basic new products that undercut the incumbent’s more advanced offerings.

The innovator’s dilemma of Christensen’s title is the quandary faced by incumbents in having to undermine their existing revenue streams in order to stay competitive.

Since then, the concept of disruptive innovation has become a mainstay of business theory – it has become the prism through which we understand why companies rise and fall, and how industries are transformed.

Lepore’s blistering article, however, was withering in its dismissal of Christensen’s research and scornful of disruption in general. “Our era has disruption, which, despite its futurism, is atavistic. It’s a theory of history founded on a profound anxiety about financial collapse, an apocalyptic fear of global devastation, and shaky evidence,” she writes, and that sentence was rather typical of her combative piece, which is notable more for its meandering mean-spiritedness than its incisive criticism.

It’s more than a little ironic that Lepore slams Christensen for his lack of scholarly rigour and cherry-picking of examples when Lepore’s piece is riddled with convenient elisions and cherry-picked examples. Above all, while it’s completely appropriate to bring critical scrutiny to bear on Christensen’s research, and it’s also more than fair to bemoan the overhyping and overuse of the concept of disruption, Lepore consistently conflates the two, which is intellectually disingenuous, to say the least.

Lepore is more convincing in debunking Christensen’s original case studies, in which he examined how the likes of hard drive companies, steel manufacturers and department stores were affected by innovative rivals – she shows that many of his examples don’t appear to be entirely explained by the theory of disruption.

There have been many sensible critiques of aspects of Christensen’s work, and here Lepore is as good as any of them.

But she can hardly deny that something is happening to, say, camera manufacturers or bookstores or newspapers, businesses that are all experiencing grave declines in revenue. It would be truly remarkable if all the companies in those areas simultaneously suffered the effects of bad management. While Lepore seems to be suggesting that disruption doesn’t actually exist, and she specifically rejects the applicability of disruption to journalism, those industries are collectively experiencing something catastrophic, and Christensen has provided us with the descriptive tools to identify that something.

On a micro-level, it’s always possible to quibble over what exactly brought a specific company to its knees, but on a macro-level, we are clearly witnessing large-scale disruption.

In a terrific post on the Lepore-Christensen furore, the author and management consultant John Hagel points out two telling pieces of evidence illustrating disruption at work: the “topple rate”, or the rate at which leaders fall out of their position, increased 40 per cent from the mid-1960s to 2012; the average lifespan of companies on the S&P 500 had declined from 75 years in 1937 to 18 years by 2011.

There are a lot of factors to consider in those shifts, of course, but as Hagel says, the combination of “exponentially improving technology and economic liberalisation are combining to create environments that are increasingly vulnerable to disruption”.

The theory of disruptive innovation is impossible to definitively prove one way or another, but long after this particular spat fizzles out, we will still be trying to understand the ebb and flow of numerous industries, and I’d wager we will still be using the concept of disruption to aid us in that understanding.