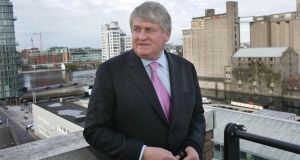 A private charity set up and funded by businessman Denis O’Brien recorded an almost 30 per cent drop in its income last year as it scaled back its spending on charitable activities in Ireland.

The Iris O’Brien Foundation, named by the businessman after his mother, saw its donations slip from almost €3.9 million to about €2.76 million, according to accounts signed off last month.

Notes attached to the accounts show its charitable expenditure in Ireland fell by more than €1 million, while it mostly maintained its spending abroad.

Mr O’Brien, the founder of Caribbean telco Digicel, is named in the accounts as the foundation’s “principal funder”. The directors state that they expect him to keep funding the organisation’s activities into the future.

The foundation provides funding to a broad range of projects at home and abroad. It has in the past donated to the Haven charity in Haiti set up by his associate Leslie Buckley.

It has also provided funding for research at Trinity College Dublin into motor neurone disease, as well as for the Special Olympics, with which Mr O’Brien has been closely associated for close to 20 years.