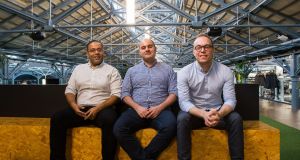 Irish retail software development company Intouch. com has announced the appointment of former Coca-Cola senior executive Francisco Crespo to its board as it nears completion of a multimillion euro funding round.

The appointment of Mr Crespo, who recently retired as the soft-drink giant’s chief growth officer, is seen as a coup for Intouch.com, which was founded in 2015.

The start-up has developed a platform that enables retailers to influence buying decisions through automated recommendations using artificial intelligence, machine learning and the internet of things.

Intouch.com, whose clients include Circle K and Carrefour, has in recent years signed a number of partnership deals with the likes of Microsoft and Re-Vision, a leader in self-scanning solutions.

He also served as president of its Mexican business, the company’s second largest market after the US, where he oversaw a seven-year $8.2 million investment plan.

Mr Crespo joins an already impressive board that includes James Murphy, owner of Lifes2Good, which sold hair brand Viviscal for $150 million in 2017, and Alan Coleman of Sweepr, who also previously founded telecoms billing company Britebill, which was acquired by AmDocs for over $60 million in 2016.

“We had a few chats with Francisco and he quickly saw the potential in the technology we are developing and got very excited about it and wanted to be involved. We’re delighted to have him join our board and his experience will be essential as we expand,” said chief executive Tim Arits.

The appointment comes as Intouch.com is near to completing a Series A funding round reportedly worth in or about €7 million. The company has previously raised about €2 million in seed funding with early backers including Enterprise Ireland.

Intouch.com was founded as a merger between two start-ups, Bundly and QReach, who decided to work together after realising they were both focused on similar solutions.

“We’re still working away on raising funds at the moment but have yet to determine the exact amount it will be on completion,” said Mr Arits.

“With the customers we’re closing and the traction our technology is getting generally, I definitely think we are on the right path in terms of expansion,” he added.