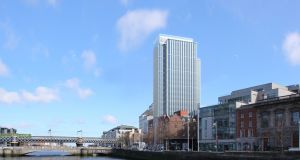 Developer Johnny Ronan is betting that Dublin’s office market will recover more quickly than the hotel sector, dropping plans for a hotel in his 23-storey building on Tara St

Developer Johnny Ronan is betting that Dublin’s office market will recover more quickly than the hotel sector, dropping plans for a hotel in the 23-storey development he is building on Tara Street, the Sunday Times reports. Separately, the Business Post notes that Mr Ronan has missed a five-year deadline to complete “substantial works” on the site. That could, it says, potentially open the door for CIÉ to back out of its agreement with the developer on the site though it is understood the two sides have agreed an extension.

Danske, which took over National Irish Bank, is digging its heels in over an order to restore a customer to a tracker mortgage. The Danish bank is taking a legal challenge to the decision by the Financial Services and Pensions Ombudsman, according to the Sunday Times. The outcome of the case is likely to affect between 500 and 1,000 homeowners, according to broker Padraic Kissane.

With nursing homes in the spotlight during the Covid-19 pandemic, investment group BlackBee has announced it is dramatically increasing its care home footprint in Ireland.The Sunday Times reports that Blackbee is to acquire seven homes from the nursing home arm of iNua Hospitality for an estimated €440 million. Blackbee’s Aperee already owns and operates two Irish nursing homes and has further plans to expand.

The State has taken a drubbing on its investment in Irish banks over the past year, the Sunday Independent writes. The Ireland Strategic Investment Fund (Isif) saw the value of its “directed portfolio” – primarily stakes in AIB and Bank of Ireland – fall by two-thirds in the year to June. That equates to a loss of €5.2 billion and was due mostly to a fall in the share price of AIB.

Adrian Serle, group chief executive of Denis O’Brien’s media group Communicorp, is leaving at the end of the year, according to the Business Post. It says the group has begun a recruitment process for a replacement with “vision, ambition and drive”. Communicorp’s portfolio includes Newstalk, Today FM, 98FM and Spin 1038 radio stations as well as eight British regional radio stations.

Michael Kelly, founder of insurance software group Fineos, has agreed to extend a lock-in period on his stake in the business as part of a €63 million fundraise, the Business Post reports. Mr Kelly, who owns 57 per cent of the business was due to be able to sell some of his €475 million stake later this month but has now agreed not to do so until next year.

Finally, Repak, the industry-funded recycling group, has dropped its opposition to a new bottle return scheme being planned by Green Minister for Climate Action Éamon Ryan, the Business Post reports. The scheme will see a charge put on plastic drinks bottle and cans which can be refunded when they are returned to shops. Setting up the scheme is likely to cost producers between €76 and €116 million.